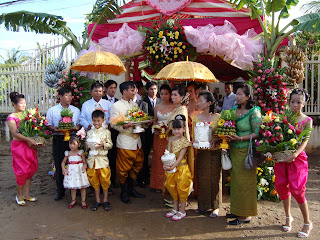 I attended a wedding. The bride is the niece of Dr. Y Ratana, one of the UC professors. He invited me so I could get a taste of the Khmer tradition. If you think weddings in the U.S. are a big to-do, you’ll be shocked at the elaboration that goes into the Khmer ceremony.

This one in particular was a quick, one-day celebration, but traditionally, weddings in Cambodia run for three days. When I say one-day celebration, though, I don’t mean you arrive at the church at noon, sit through an hour ceremony and the party at the reception all evening. Today, the traditional ceremonial part of the wedding began at 7 a.m. (Can you even imagine how early the bride and her attendants had to get up to get into hair, makeup and costume? If my big day started that early, I’d go from lovely wife-to-be to bridezilla in a matter of seconds.)

The ceremony kicks off with the guests making an offering to the betrothed couple. The groom waits outside the bride’s house and the guests line up behind him carrying trays of fruit and other goodies (which were all bought by the groom’s family). This was a tricky act to perform today, as the road outside the house was flooded due to the two hours worth of torrential downpours we received last night. Muddying up my shoes, I got to carry a tray of pears, but some of the other trays contained cookies, pop, beer and pigs legs. 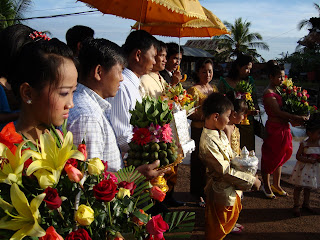 The bride comes out of her house to greet her soon-to-be husband dressed in an ornate gold costume, with her bridesmaids also dressed in traditional outfits. They all are wearing flowers in their hair, fake eyelashes on their top and bottom lids, and lots of glitz – they look gorgeous! The groom then presents his offering to the bride and the couple exchanges flower necklaces. 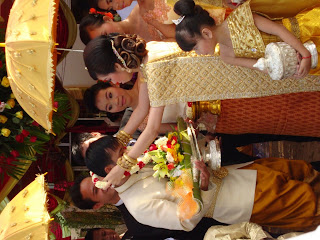 Then the guests follow the couple into the house for the ceremonial proceedings. The actual ceremony takes place in the living room of the bride’s parents, so most of the guests sit at tables under a big pink tent outside and listen to the ceremony that is broadcast through a sound system. The ceremony isn’t officiated by a religious elder (like a priest or rabbi) like we are accustomed to in the West, but by a person who specializes wedding ceremonies. (In other words, you won’t see a monk performing a wedding ceremony.) 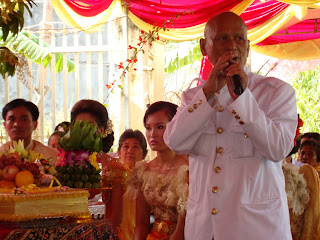 A traditional Khmer band begins to play and the couple’s immediate family, as well as what appears to be elderly women in the family, gather around the offerings that are placed on Persian rugs in the middle of the floor. (Asian households do not typically have carpet so the rugs make the place look extra special.) Then a song about the different fruit is sung to the couple. The food offerings that were carried in by the guests represent the 36 different kinds of fruit that come from the mountain where Buddha was born, and the singers select bits of fruit from the various trays to present to the couple. 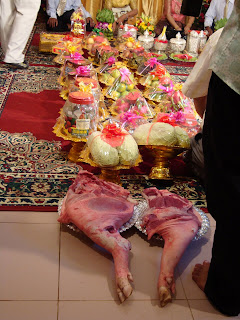 The next part wasn’t really explained to me, but it appeared that the bride and groom are then introduced to their new in-laws. Pictures are taken, of course (as they are throughout the whole day) and the couple performs a series of bows out of respect for their new family. 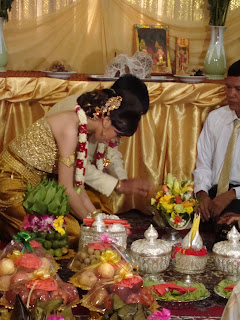 Then the bride and her attendants disappear to change outfits and the guests are invited to eat breakfast and mingle. They served bobo (rice porridge). I’m not sure if this is a typical wedding day meal, but it’s a typical breakfast or evening food. 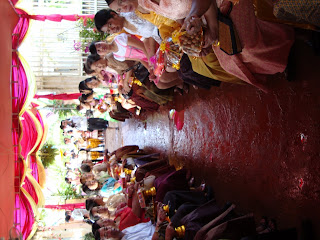 After an hour or so of mingling comes the hair-cutting ceremony. At first I was scared that they were going to cut the bride’s beautiful hair off, but this isn’t the case. Buddhists are very superstitious and this ceremony is a symbol of luck. Preceeding the “hair-cutting,” the singers sing and talk. (I’m not sure what they were saying, but everyone found it funny). Then the family of the couple comes up to perform the ceremony. Each member of the family pretends to cut the hair of the bride and groom and a perfume is sprayed over the couple and their attendants.

I left in the middle of the hair-cutting because it takes a long time -- every single member of the couple’s family takes part.

Around 6 p.m. the party reconvened at a restaurant for the reception, where we ate and danced. Upon arriving to the reception hall, the bride and groom greet the guests and hand out small party favors. I got an elephant ornament. Insides, a Khmer wedding singers perform popular music. All the girls are dressed in formal wear, similar to what you might expect to see at a prom. Initiating toasts popular and I must have said "cheers," or as they say in Khmer - "chel muy," at least a dozen times. (With so many toasts, you have to be careful to take small sips!) 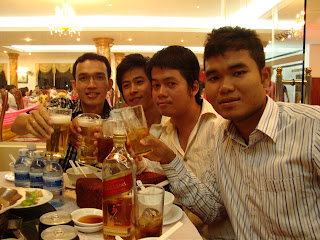 After dinner is served, the bride and groom have changed outfits and pose with their cake -- a Western tradition that is now incorporated into most modern wedding celebrations. The bride is wearing a white dress, similar to one that we would think of. Then a carpet is rolled out and the bride and groom walk down "the aisle" towards their cake to the wedding march. 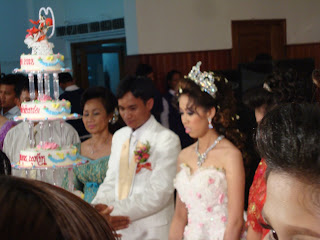 The guests light sparklers in celebration and after the wedding march is complete, the couple is sprayed with silly string. Then the bride and groom cut the cake and feed each other, rather politely. (There's no smushing cake into anyone's face.) The cake is served only to members of the family, so the rest of us had to settle for regular "bong eam." 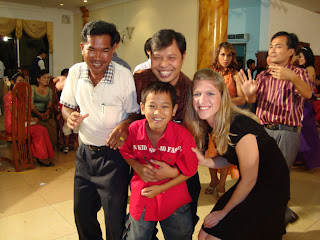 After the cake ceremony, the bride changes dresses yet again (this is the third for the night and fifth for the day) and the couple kicks off the dancing with their first dance as man and wife. 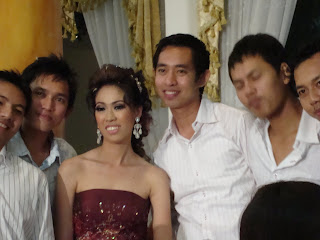 The Cambodians love to dance! I tried to catch on to the steps and the hand motions, but I think my skills still need polished a bit. Judge for yourself. Here's a video of Veasna and Dr. Y Ratana trying to teach me:

Well there you have it -- the big fat Khmer wedding. It doesn't matter if you are rich or poor, if you are Cambodian, you're wedding has to be huge. Because of this family's modest income, the number of guests was limited to a 150 or so (I didn't count for sure, but the reception hall was packed), but the rich families
must show a little more face.

That's awesome that you got to experience that! And good job dancing :)

Sounds like quite an ordeal! No one in America could bitch if they saw what all the Cambodian guests and members of the wedding party go through, haha.