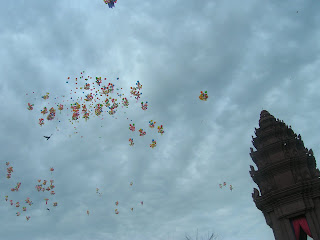 I was vaguely aware that today was a holiday, but I was starkly reminded of it at 6:30 this morning when cheers from a crowd gathered at Independence Monument drifted through my bedroom window. I was tempted to ignore it and go back to sleep, but I’m only in Cambodia once, so I groggily got dressed to go check out the commotion.

I ventured across the street to the monument to find representatives from all branches of Cambodia’s military surrounding the symbolic structure. I sorely stuck out in the crowds of Cambodians dressed in their formal wear – dark pants or skirts paired with a white collared shirt for students and the traditional skirt and white lace top for adult women – as I was wearing my wrinkled green pants and blue t-shirt that I pulled out of yesterday’s laundry.

Signs and balloons indicated to me that today is Independence Day – the 55th year, actually. (As I’m taking this all in, still half asleep, I begin to remember my conversation last night with the UC guard, who was explaining to me the holiday.) Kids waving signs and flags lined the streets awaiting the arrival of the king and prime minister. A traditional band sat on the steps of the monument playing the tinkling tunes reminiscent of Cambodia’s past while a military band intermittently interjected patriotic marches.
After hanging around for a while with the excited crowd, the king finally arrived and the cheering began once again. I wish I knew what they were saying. The caller would announce something about “Kampuchea” (that is, Cambodia) and the crowd would respond enthusiastically in unison.

The king’s procession made its way through the crowd and up the steps to the monument where a huge flame was lit and birds and colorful balloons were released. The flame will burn for two days and will be extinguished on Tuesday in a similar ceremony, a girl in the crowd told me. The national anthem was played as the flag was raised, followed by the military repetitiously singing another sort of anthem. (I need to find out exactly what this one means.) Finally, the king and the prime minister circled the monument in fancy cars, waving to the crowds, and exited.

It was quite an exciting ceremony and unexpected wake-up call this morning. Thinking the fun was over, I headed back to my room only to be called out shortly after by a parade that was traveling around the monument and toward the royal palace. I love parades, so I took a seat on a curb right beside the monument and watched as ornate floats from all the different governmental ministries and national organizations passed by. Unlike American parades, however, no one tossed candy. (Bummer.)

Check out the videos below will give you a better sense of the atmosphere surrounding today’s events. Forgive my videography (not only is my camera on its last leg, but I’m still learning how to keep a steady hand while shooting video. You can hear the two anthems that were played this morning and get a feel for the crowd.