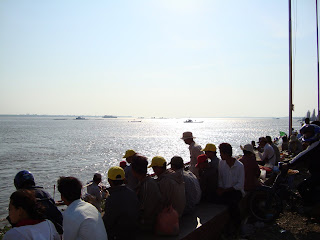 Any town looking to hold a celebration can look to Phnom Penh for some pointers. It's no wonder people from the provinces flock to the city in droves for the three days of Water Festival. There's so much to do, so much to eat, and this year, the weather is amazing! For all you Columbusites (Columbusonians?), think of a regatta then add in a little Red, White and Boom plus a dash of Ohio State Fair and then multiply it all times 10 -- voila, you've got yourself Water Festival.

Nighttime Festivities
I began my festival experience Tuesday night with a walk around the park -- the normally spacious park that on this night, was filled wall to wall with people. Crowds greeted immediately greeted me as soon as I stepped outside my room, so I squeezed my way through the maze of food vendors selling delicious Khmer favorites, families with their picnic mats spread out and conga lines of teenagers trying to keep together during their own festival explorations. 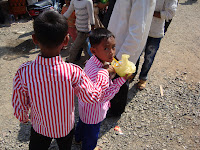 Evenings during these three days kick off around 6 p.m. with a fireworks display at at the riverfront. Around town there are several live music stages set up, playing anything from traditional Khmer to Khmer hip hop and pop to foreign music (the likes of the Swedes and Bollywood). Walking a less than two-mile stretch took me across three stages and a fair-style market promoting popular products at outrageous discounts. At 25 cents per tube of Colgate toothpaste, I'm contemplating stocking up, but for my first night out I settled on a one-pound bag of coffee for $2. (Beat that Starbucks!) 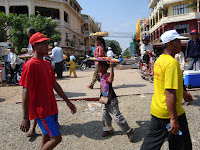 I stopped to watch shows at a couple stages. A stage near the casino by the river seemed to be geared toward a mature crowd, with traditional Khmer dancers setting the ambiance for swooning pop singers. The stage near the park, however, decked out in a Parisian motif, attracted a slightly younger crowd with more upbeat Khmer pop and hip hop. Across town in the riverfront district, several more stages were set up, but I decided not to venture that far on my first night. Instead, I planted myself on some steps near near stage at the park with a bag of popcorn. As tends to happen from time to time, I made friends with some Cambodians who were intrigued by the foreign perspective and looking to practice their English. 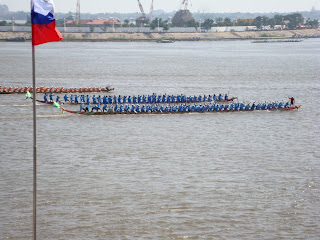 Riverfront Regatta
Wednesday, I got up early to watch the boat races -- the trademark event of the festival. The sky was clear and sunny and a wonderful breeze blew off the river, making me rather chilly -- a first for me in Cambodia! I grabbed a coffee and seat on the second-floor terrace at the FCC, which made for a perfect view of the boaters rowing by. Unlike the small rowing teams I am accustomed to in the States, the Water Festival boats boasted teams of 20 to 40 rowers. The boats are long and elegant with dragon style design-work painted on the sides and the teams worked together in amazing unison to glide their ships across the sparkling water of the Tonle Sap. 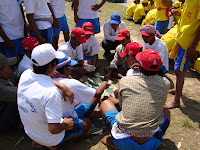 From what I gather from talking with several people about the meaning of Water Festival, the races are reminscent of Cambodia's ancestors who fought in wars to defend the country. Spectators along the river banks wear hats of bamboo and cover in krama scarves to protect themselves from the sun, while feasting on snacks like om buk, flattened dried rice that compares to Rice Crispies. Teams finished with their races gather in groups playing cards or dancing in celebration. 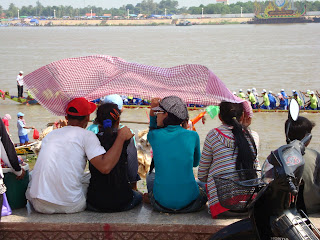 Along the river at night, a parade lights up the river with floats representing each of Cambodia's ministries. I ventured down to the river front last night with my friend to see them. The floats are pretty amazing. Like everything in Cambodia, they are huge and ornate and quite a show. (I forgot my camera last night, but hopefully I can get some good shots of them tonight.)

Here's a good site that explains more about the details of the meaning of Water Festival.
with love from Rachael at 1:09 AM

Sounds like an awesome time! PS, thanks for the Ohio tips. I'll be there in a few weeks so will let you know if I need more guidance.