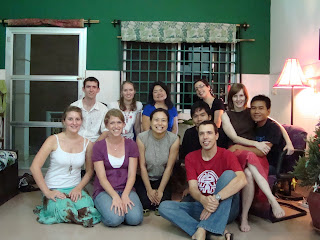 Happy 2009 everyone! I beat all you Americans to the new year, so hopefully this year is a good one because I'll have an extra 12 hours of it.

So chat with me. What did you do to celebrate? What are your resolutions? Does anyone actually make resolutions anymore?

It was raining here in Phnom Penh on New Year's Eve, which was a big bummer, but I had dinner and game night with a mostly Australian group of friends. We resurrected Mafia, a game I haven't played since high school.

I'm still deciding on a new year's resolution, though I'm not a big believer in them. (I'd rather be perfect all the time.) However, I've already made a pact to myself to get up early during the week to run. I suppose my resolution will be to keep that up. And learn to make good, healthy meals in my rice cooker. Oh, and commit to a full-time job. That will be a big one come June.

**On a side note, I'm trying really hard to add photos from Christmas in Kep, but the Internet has been very uncooperative with uploads lately. Hopefully, I'll have them up before the turn of the decade.**
with love from Rachael at 11:11 PM

Happy 2009 to you! I stayed in Champaign and went to a pretty chill party. I had to work several hundred miles away in the morning, so after the drive, wasn't in the mood for a big college party anymore :-). My kind of resolution is to exercise when I'm at hotels because they have an exercise room right there and I don't have much else to do, as well as eat better at restaurants. I'd love to say I wouldn't eat at restaurants as much, but such is my lifestyle. So that was my New Years! Glad yours was fun.

Happy 2009! I spent my new year at a good old redneck bonfire with my family. It was a ton of fun. As far as resolutions go, mine is simple: BE HAPPY. That means if I think running and working out will make me happy, I'll do that, but if sitting on the sofa will make me happy, then I will do that instead.