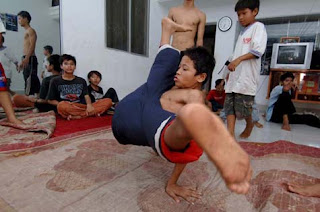 A river boat rocking with Khmer-seasoned hip hop beats might be a novel image stirred up from among Phnom Penh's streets. But from this unique blend of modernity, youth, music and the beloved Tonle Sap, comes the soul of Cambodia and a youthful creativity that could change the face of the country's rapidly progressing future.

In a brief blog post about a month ago, I shared an article I came across about the story of a man named K.K., who, after being deported to Cambodia from the U.S., started up an organization to give street kids an alternative lifestyle - one that trades in begging for break dancing. Last night at Pontoon (a floating night club), I got to see part of K.K.'s troupe, Tiny Toones, in action.

I couldn't help but feel inspired by the rhythmic Khmer lyrics of these urban youth. Although I couldn't understand the literal translation (except a few words here and there I was able to catch), the pride that the artists felt in their country and their abilities to share a part of themselves with an energetic audience was evident on their faces. At last, I could feel the creativity and positivity emanating from the people here - something I realized I, during my time here, have been longing to see.

Maybe to Khmer traditionalists, this form of expression seems too Western - too far beyond the reaches of what is acceptable in a "proper" society. But the artists of Tiny Toones have taken this genre of music and dance and made it their own. Instead of rapping about money and wealth, they touch on issues like HIV/AIDS. They especially made last night's performance their own when, in true Cambodian fashion, the power went out during their break dance routines. Instead of letting the lack of lights and sound get to them, they got the crowd to clap out some beats and kept the show rolling.

I am angry at myself for not bringing my camera along last night, but check out this video from YouTube to get an idea of what Tiny Toones is all about. Oh, and my five-degree claim to fame, Bandol (who I work with) is college buddies with one of the guys who helps run Tiny Toones. (And I also found out that Bandol used to break dance, which I'm trying to persuade him to show off. haha.)

(Picture courtesy www.tinytoonescambodia.com)
with love from Rachael at 1:36 AM

hey i just noticed your logo/heading thingy in the top left, it looks cool, how did you do it?

Thanks Katherine! I made it in Photoshop and used the option where you can upload an image instead of a title. :)