Not Quite an Irrawaddy Dolphin 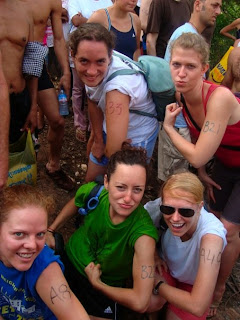 This week has completely flown by and I haven't even had the chance to update you on my amazing weekend.

For starters, on Saturday night I went with some friends to see the Phnom Penh expat community's version of The Vagina Monologues, of which my friend Betsy (see girl in green on your left) played the narrating role. The cast did an amazing job and all proceeds benefited the local NGO Women Peacemakers, which combats domestic violence here in Cambodia. Read more about the women's work behind the play here.

Second exciting event of the weekend was the Mekong River Swim. Now, if you think that getting up at 7:00 on a Sunday morning to swim 780 meters across the questionable waters of Southeast Asia's most prominent river is crazy, then call me crazy. To tell you the truth, I was not at all prepared for the difficulty of this swim. Sure, I can keep myself from drowning, but to call myself a proper swimmer, let alone a strong swimmer - that's just laughable.

The swim is an event held by the expat community every year for the past 14 years. Every year, the same French guy wins. This year he made it from bank to bank in just over 7 minutes. I, adopting the theory that slow and steady will get me across safely, made it in 24. But I made it! When in Cambodia... 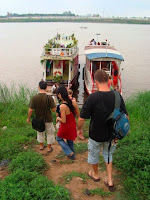 In just two weeks, I'll be traveling north to Kratie to see the rare freshwater Irrawaddy dolphins that also bath in the Mekong. I think from now on leave the river running to them.

Keeping me busy this week was the university's 5th Asia Economic Forum. Now, usually talk of the economy stresses me out (especially when I think about how I need to find a job less than three months from now). However, the top leaders who participated in the conference, which focused on how the global crisis is affecting Asia, touched on interesting topics such as social entrepreneurship, climate change and non-traditional securities like food, water and energy, making for a stimulating couple of days.

(P.S. Thanks Betsy for letting me steal your photos!)
with love from Rachael at 3:14 AM

Sounds like a fun weekend! I don't think I'd be up at 7am to do that swim, but glad you accomplished it!