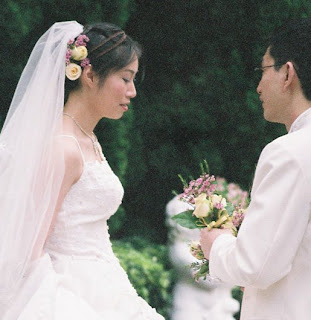 One of my best Khmer friends in Phnom Penh is an outgoing, modern girl with a high optimism toward life. Because I struggle with the mindset of this society rooted in steep traditions, I admire her vivacious spirit. But as I have witnessed, even forward-thinking people like her, at one point or another, feel the constraints that cultural traditions sometimes hold.

Over the past week, she has been turmoiled by a family conflict. Her parents asked her to consider a suitor for an arranged marriage.

As a 23-year-old in patriarchal Cambodian society, my friend is considered "getting old." It's not uncommon for girls to marry around the age of 18 or younger, as was the case with her older sister. However, she is ok with her age. Still feeling young in a world full of possibilities, she doesn't want to marry for economic obligations, but for love.

To western ears this sounds simple enough, but assume the gendered lens of a culture where children live to please their parents and girls especially hold the burden of being family peacemakers and servants, the proposition hasn't been easy for my friend. She doesn't want to make family rifts, but the thought of marrying a Cambodian American she met once and being shipped off to the states sets her world off balance.

Her family is a pretty congenial, open-minded one. For example, when she decided to leave the Buddhist faith and become Christian, ger family wasn't completely happy at the move, but allowed her to make that decision without much reproach. In this air of openness she shares with her family, she has already expressed her opposition to arranged marriages yet still feels the pressure of keeping everyone happy. If given a proposition, she has the opportunity to say no, which means a tough decision for her.

The thought of arranged marriages seems archaic and ancient doesn't it? Coming from a place where it a purported right to marry as you please. But is one method better than the other? Many arranged marriages work out where many based on love fail. Interesting thought, isn't it?

I, for one, would hate to be forced into something I didn't want to do, but I can't say whether one way is better than the other. What are your thoughts on the matter?

For more information on what arranged marriages are all about in Cambodia and elsewehere, read these articles:
Arranged Marriage Facts
Cambodian Marriage

Photo courtesy www.heleneauge.com.
with love from Rachael at 10:30 PM

wow- how scary if you had to leave for overseas with a stranger! my sis in law is "getting old "too, my mum in law wants her to get married soon, by my husband wants her to finish high school first. i don't know what she thinks, the discussion is just between her mum and brother, her thoughts don't seem to come into it. If she gets married her mum will have a family to live with , as she is getting old, in her late 50s.

My Khmer host dad asked me once if I was going to go home so my father could find me a husband and my response was "no, no, no... no...no" I was trying to say more, but the only word that could get out!
Most of the Khmer people I know who married for love still did it within the confines of their families and if the parents disaproved they wouldn't have done it.
I think Cambodians are much more dependent on the support of their families then we typically are. So they really do need to consider these things more then we do.

Oooh, my Grandmother once said to me "If we were in a culture that had arranged marriages I would have set you up with ..." and I was like "Thank Goodness we're not!"

My dad's parents were in an arranged marriage - and they both have kids with someone that they loved in addition to the kids they had themselves. It's all crazy!

I think it definitely comes down to the culture and whether you are accepting of the culture or rebellious of it.