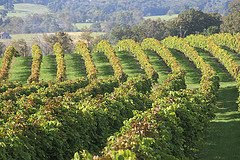 Happy Monday friends! How was your weekend?

My friend Matt visited and we enjoyed the autumness of Lexington. After checking out the local produce (and cheese!) at the downtown farmers' market, we drove out to the country for a wine tasting and to listen to some local blues. (Apparently the middle-aged Nick Stump Band were Kentucky legends as the MetBlues Allstars back in the 70s.)

Then, in an act of spontineity, we drove an hour to visit Elizabethtown (from the movie), but as it turns out, most of the film was taken in the nearby town of Versailles and the big hotel scene in Louisville. So instead we crashed the town's ghost walk and went on the not-so-scary hayride.

In the meantime, I've been downing mugs of Airborne and honey laden tea in an attempt to ward off a cold that really wants to bring me down. (So far, the Airborne and the tea are winning out.)

Have a lovely week!

Photo courtesy Lover's Leap Vineyards and Winery
with love from Rachael at 7:17 AM

You know Airborne is a scam, right? I can't believe they still sell it following the multi-million dollar lawsuit.

I didn't know that. But it seemed to work anyway. I didn't get sick!

Also, as far as Kentucky wineries go, there are some decent ones around here. In fact, I've found the KY offerings to be better than NC and VA despite the better reputations of those states.

The key is to find which varietals each does well since they all generally offer so many. It's hit or miss, but it's fun to do the tastings and find out what you like.