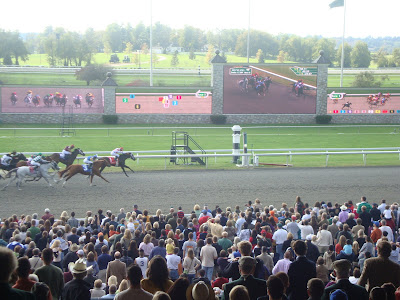 Before I moved to Lexington, the term "Keeneland" meant nothing to me. But as happens when one wishes to successfully transplant, the local vernacular must quickly be adopted. This weekend, as my official initiation to Lexington life, I attended the October horse racing invitational... at Keeneland. I've never been into horses or gambling or races or anything of the sort, so I had no idea what to expect, but I was eager to learn. Luckily, the managing editor on our magazine -- an avid rider but not racer -- came along with me to show me the ropes.

As we took our seats in the grandstand I couldn't help but think of the horse race scene in "My Fair Lady" because we were in attendance to quite the swanky event. On this cool, crisp sunny afternoon, I, in my "nice" jeans and heels and fallish pea coat, felt under-dressed among the girls in cute dresses with tights (so excited for tights this year!) carrying parasols and men in crisp blazers and ties. (I believe I even spotted a bowtie.) The scent of cigars wafted through the air and people cheered as the thoroughbreds galloped by. It was, as the chorus would say, a "smashing, positively dashing spectacle."

For the novelty of it all, I had to place a bet. I put my minimum $2 down during the 7th race on a horse named Naughty Bits. She had a 1-30 chance in winning, and while she didn't completely lose the race, that is $2 I will never see again. What can I say? There's a reason I don't gamble.

I will be up front is saying that I've never understood horse people. Never got the obsession, whether it be riding or racing. But this is Lexington. Horse country. It's as much part of the culture as bluegrass and bourbon. I might not have gotten it before, but I'm starting to catch on.

(Forget convos on health and the weather. Want to talk the talk at Keeneland? Check this out.)
with love from Rachael at 11:33 PM