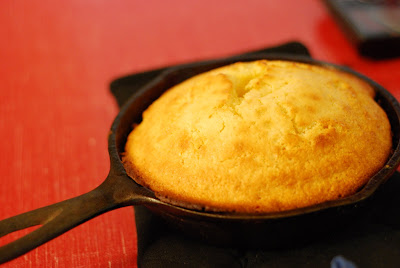 Last night, I celebrated Valentine's Day by stepping into a new community, one different than any other I've been a part of before.

Every week, a couple in town hosts a Cornbread Supper. They open their house to their neighbors and the surrounding community to share in good food and good company. Friends and strangers alike are invited to bring a dish to share (but if they can't, it's OK), and each week a group of anywhere from 15 to 55 people assembles in the kitchen of this home. Although you never know what's going to be served (though, if last night was any indication, it's always something yummy), there's always some form of cornbread gracing the table. The hosts say their cookbooks are filled with variations on this hearty recipe and it's a Kentucky gustatory staple that shouldn't be ignored.

The mix of people who attends Cornbread Suppers is an eclectic yet delightful one. There's the young woman who opened the town's only bikram yoga studio, the pastor with two kids who is getting ready to write his second book and the nearly retired professor who is a pioneer in sustainable architecture. There's the young guy who opened the town's only shop that serves fresh, Italian pasta, and the older gentleman who plays violin for a group that practices a traditional form of English country dancing. Kids run around with carefree pleasure while the wiser, more experienced generation listens fondly to those of us living our adventure somewhere in between.

The open hospitality of this community is one that is rarely shared in our bustling self-centered society, and I'm so grateful to have been welcomed into the house where the smell of cornbread baking matches the love extended to other human beings--warm, comforting, fulfilling. The evening got me to thinking, can something as simple as cornbread change the world?

Photo thanks!
with love from Rachael at 7:08 AM

What a great idea. Yet another reason why I love the south. I've been having people over to my apartment lately and setting out snacks. It's amazing how much fun you can have just to gather and eat!

This sounds like so much fun! I just made cornbread last night, what an appropriate post to stumble upon :)

Can I come join your community?? :-D