Switzerland: More than chocolate and knives 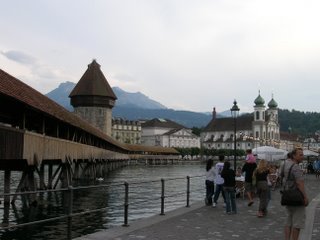 Today was a driving day. Eight hours on the road, at least. The perfect opportunity to rest up after the loads of walking through Paris. Also a great time to get to know my fellow Contiki travelers. It’s amazing what friendships spring up after elongated amounts of time on a coach. We had fun though, dancing through the isles during the day songs. (You will not understand the value of a day song until you’ve been on a Contiki. Once home, you tend to miss hearing “Move Your Feet” and “Love Generation” at 7:00, morning after morning.)

So after our dancing and snoozing and time spent getting a little closer with each other, we arrived in Lucerne around 5:00 p.m. Let me tell you, Switzerland is beautiful! I don’t know how much of an impact this word has any more or how much credit it holds since I’ve been using it so much, but I couldn’t believe my eyes as I gazed out at the Swiss Alps. They are utterly amazing. The city – a picturesque scene straight out of a storybook. Cobblestone roads, windows with shutters and flower boxes and the beautiful Lucerne River decorated with a covered wooden bridge. And all of this overlooked by the majestic beauty of the snow-capped Alps. It’s fantastic! 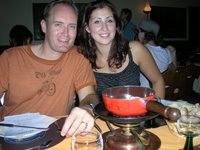 The only real thing that we did today was take part in a traditional Swiss dinner at Stadtkeller. The meal consisted of fondue, a veal/mushroom mixture, rosti (grated potatoes), and a strawberry ice cream/meringue dessert, but it was the entertainment and atmosphere that truly made the night one of the best that we’ve spent in Europe thus far. Now when I tell you that the show consisted of yodeling, cow bell and bottle playing, flag twirling and broom dancing, you’re going to say to me, how lame. Am I right? Well, then I’m just going to have to tell you you’re wrong. Contiki has a way of turning what may seem somewhat as a dull situation into a fabulous night. My the end we had a conga line weaving through the restaurant and our tour manager, after chugging a glass of beer, serenading the yodelers in his own Aussie variation of the song. 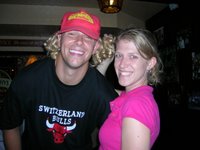 Once we left dinner, I figured this small town would lend itself to an early night and a long sleep to prepare for the morning, but of course I should have given the evening more credit. This is a Contiki, after all. While several of our fellow passengers took part in their own rendition of Lucerne’s Blue Ball Festival, with a late-night jump in the river, Diana, Kathryn and I decided to get lost in the town. In the end, we got caught in one of Switzerland’s abrupt torrential downpours. And it was a little cold. (A Blue Ball Festival of sorts you might say.) So we ran into a local pub for shelter and we ran into none other than our fabulous Contiki staff. If you have a chance to get to know these people on your trip (assuming you go on one, which you totally should!) please do. They some of the most fun, most knowledgeable, interesting people you will ever meet. 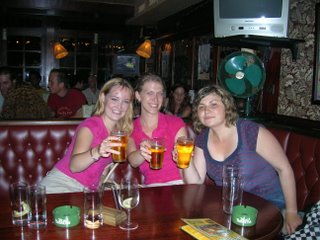 Even though the rain never really let up, we made our way back to the hotel. Yay for a fun night in an unsuspecting place!
with love from Rachael at 11:31 PM