My cow town away from home 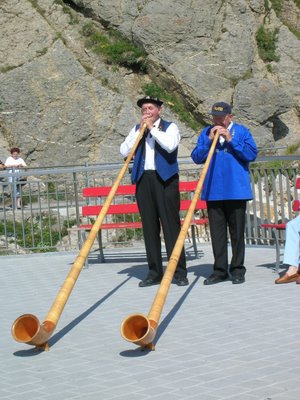 Mt. Pilatus. One of the highest points, if not the highest, in the Swiss Alps. I’ve never seen something so beautiful in my entire life. Switzerland has an interesting connection to its mountains. Actually, it is an interesting country in general. Of course, we all know it as the center of political neutrality, but the intense security measures they follow to keep this status is quite interesting. For example, they keep planes hidden in their mountains, so that if a war should ever erupt they can fly their planes straight through the mountains. They also have camouflaged secret landing strips as highways and fields, which they can convert at a moment’s notice. In addition, all the men of the country, ages 19 to 52, must take part in the army and carry a weapon on them at all times.

But moving away from this political talk, the mountains play a big role in the Swiss culture. And riding up to Mt. Pilatus on the air gondolas, we got a real taste of the scenery. The mountains are laden with beautiful trees and flowers, and speckled with log cabins and tiny white churches. You also cannot miss the sight of their oh-so-dear cows and the clanking of the cow bells ringing through the countryside. The Swiss send their cows up to the mountains for the summer, where they lounge and graze through the fields. But once the weather chills, the cows make their way back to the farms, and it is at this time that the people hold a celebration. They dress up the prettiest cow in a wreath and flowers and hold a parade through the streets as well as other music and festivities, which we had a little taste of last night. 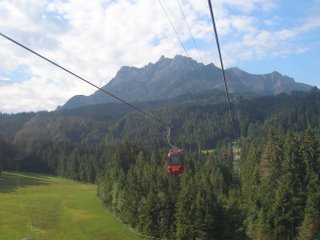 Once we made it to the top, we climbed a bit further for a breath-taking view of the snow-capped mountain range. And it was breath-taking indeed. The lack of oxygen at this over 7,000-foot altitude made climbing a flight of stairs an aerobic workout. Of course, we also had to partake in some Swiss hot chocolate while taking in the fresh crispness of the mountain air. We were lucky enough to arrive on the mountaintop on a perfectly clear day. We got to see some great wildlife: the cows, some birds and even a mountain goat. It wasn’t until we were ready to depart that the clouds began rolling in. 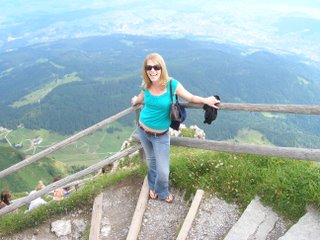 We took a train down – the steepest cable car in Switzerland, I believe. Again, we saw some cows, face to face this time. We also saw first-hand one of Switzerland’s hidden landing strips. It was in a field and the plane hangars were topped with grass so as to blend in with the scenery. Those sneaky Swiss! 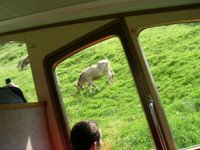 Now we’re off to Austria for some extreme sport action! Should be fun! 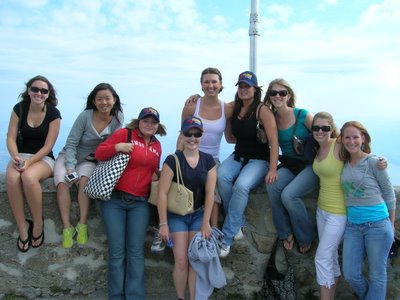