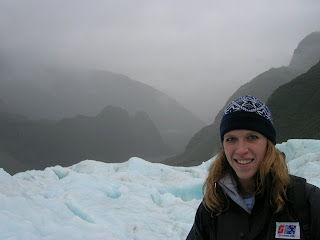 A recap of our last night in Queenstown: the Ledge Swing was the scariest thing I’ve done my whole life – including skydiving – and I’m not sure I’ll ever do anything like it again. How it works is, like a bungee, they strap you into a harness and slowly edge you over the side of a cliff on this pully system until you are chilling in the middle of the air, feet dangling over the town below.

Then, when given the signal, you have to pull your own rip chord and go flying through the air. I was scared stiff, literally, and my friends say I didn’t even scream. The flat out fear stifled any chance of an adrenaline rush to lift my spirits (though probably partially due to this cold). But to look at things positively, I did this all in the dark, which made things a little better because I couldn’t see anything below me to tell how high I was.

Today was kind of a strange quick day. We were on the road most of the day until 2 p.m. when we stopped at Fox Glacier. I had previously signed up for the 4-mile hike up to the glacier, which with the way I’ve been feeling, seemed like a daunting task. But despite my setback, in typical Kiwi fashion, it was a really cool experience.

The hike up the glacier definitely tested my fitness. I made it but struggled with my breathing most of the way. I consider myself in fairly good shape, so I can’t imagine the struggle of someone who is not. 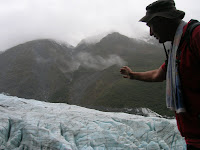 Once we arrived at the top of the glacier, we explored the area for about an hour. The ice was so thick it appeared blue, which our guide Roger explained is because water reflects blue light. But what was really cool was that despite the fact that we were walking on a gigantic block of ice, we could see the green forests surrounding us. Fox Glacier is one of just three thermal glaciers in the world, meaning it exists in not so frigid temperatures. Unlike most glaciers it is not covered by snow but surrounded by a rain forest and during most of the year, people hike it in shorts. 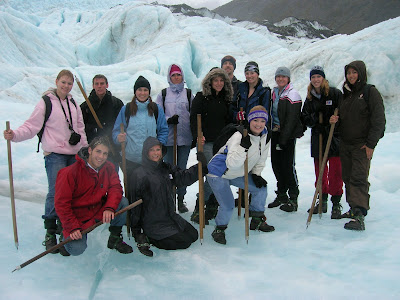 It is also the only glacier in the world that is still growing. I believe Roger said it crawls along at about a meter per day, which, if you are not familiar with glacier paces, is quite a lot. Apparently, every day the guides have to climb up and carve out new steps for the hiking groups because the ice turns over itself so much. You can’t even stand at the base of the glacier because if you were to touch it, it would tumble on top of you. 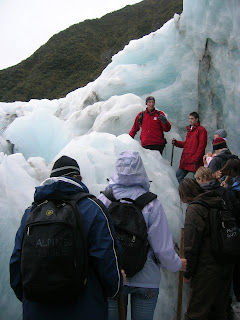 Besides having to overcome some fitness obstacles, I once again faced the challenge of my fear of heights. On the hike up we traveled over a narrow ledge overlooking a 30-meter drop with not even a chain link rail to prevent me from tumbling over. Needless to say, I pretty much scaled the side of the mountain and held onto the rope that was not so tightly fastened into the side for dear life. (If my mom knew what I was doing today, I think she would have preferred the skydiving.)
with love from Rachael at 5:52 PM