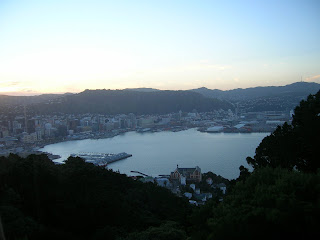 I skipped a day in my updates, but only because yesterday was another driving day as we set out toward the north island on the second half of our journey. After six hours on the road and three hours on a ferry, we made it here to Wellington, the capital city. Last night we ate out at a Mexican restaurant called Flying Burrito Brothers. It was good but not fantastic because I do not care for the way they spice food here.

Anyway, Wellington is my kind of city. It’s young and hip and there’s a great variety of places to eat. Not to mention there’s a beautiful waterfront that would be perfect for jogging along on a lovely day. It’s just the place I could see myself moving if I lived in New Zealand.

So far we’ve learned some interesting facts about the city. A few years ago, as part of it’s Get Fit Wellington campaign, the city gave anyone who wanted it a free three-month gym pass, and after the three-month period, paid 50 percent of the gym fee. Also, Wellington is home to the county’s most dangerous airport. Pilots must have three years experience to land here because of the narrow landing strip in the water. The city also lays in the Ring of Fire, making it prone to earthquakes. 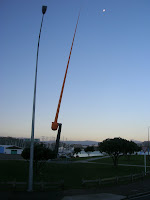 Today we got the chance to explore this fascinating city. After sleeping in a bit (and how nice that was!) we headed toward Te Papa, the national museum. I think of it as similar to COSI in Columbus because it was geared toward a kid audience. But there was an art exhibit there that was decent, so the fact that the admission was free made it a great day activity. 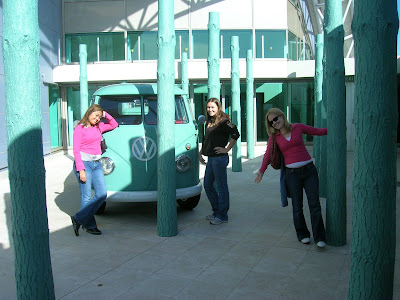 From Te Papa we headed down the waterfront to “the beehive,” otherwise known as the Parliament building. We decided not to take a tour because we were 10 minutes late and didn’t want to wait around for the next hour. 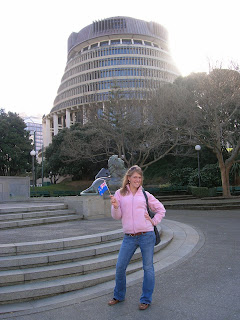 Afterwards we did some vintage shopping on Cuba Street, the hot center of town. Then we joined up with part of our tour group for a rugby game – Wellington vs. Otago. It wasn’t an exciting game and neither were the fans, but it was still cool to go to my first live rugby game. We cheered. We drank some native New Zealand wine from tiny bottles. It was a good time. (The wave is international). 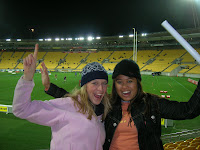 Well, I’m tired and still have this cough so I’m heading to bed.
with love from Rachael at 2:10 PM