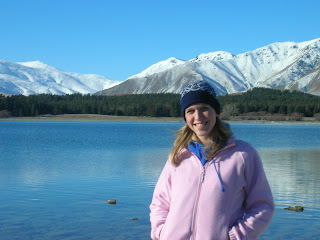 The open road beckoned our presence as we embarked bright and early this morning from Christchurch on the first day of our two-week journey upon the Contiki coach. As we headed west toward Lake Ohau, tonight’s stop, the brilliance and majesty of the Southern Alps took my breath away. And though my eyes begged me to rest, I couldn’t help but take in the beauty of the snow-covered mountains as we traveled through the Mackenzie Basin.

Along the way, we made several stops. The first brought us to Geraldine, home to (please, contain your excitement) the world’s largest sweater. Or if you want to speak proper Kiwi, the largest “jumper.” The fields of this region are scattered with sheep, making wool highly abundant. And given the frigid temperatures of this polar region, it’s highly necessary as well. 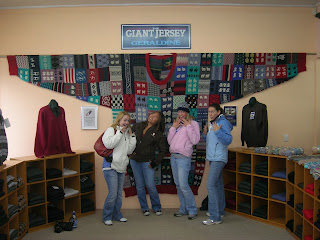 After taking the opportunity to appreciate the mecca of all things warm and wooly, we hopped aboard the coach once again. Before reaching tonight’s lodge, we made two more stops at lakes Tekapo and Pookaki to take in more picturesque mountain ranges. But the most beautiful stop of them all is our destination.

We’re staying at the base of a ski mountain called Lake Ohau. The pristine waters of the melted glaciers reflect the majestic peaks. And, being out in the middle of nowhere, we have an awesome view of the nighttime sky. Forget television, tonight’s show is of the Milky Way with star appearances by the Southern Cross. The Southern Cross, as Eddie our driver told us, is the southern hemisphere’s version of the North Star. The four stars in this pattern take the shape of, as the name suggests, a cross, with the tip facing south like so: 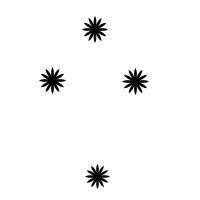 Shortly following a home-cooked dinner provided by the lodge staff, we enjoyed the sky scene while basking in the relaxation of the outdoor hot tubs – the warmth being especially appreciated by those of us who left our 90-degree homes just two days ago. Tonight we befriended a few of the tour members: Eduardo from Brazil, but a self-proclaimed “world nomad” who has lived in several other countries and will reside in Paris after his holiday; Bruno, also of Brazil, who will be celebrating his 21st birthday this week; Mitch of Australia, who idolizes AC/DC to the point of having the band’s logo tattooed on his bicep; and Stuart of Australia, one of Kevin’s roommates that we’ve fondly adopted into our group. 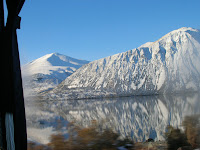 Other than that, tonight will be an early night. Tomorrow’s 6 a.m. wakeup call will be a killer, but we will continue west toward the Milford Sound for an overnight cruise.
with love from Rachael at 5:06 PM