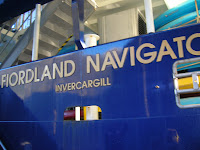 We approached take off this morning at 7:15 a.m., a good hour or so before the sun greeted us. However, still on U.S. time, I had no problem waking up and did so two hours before my alarm. The one bad thing about traveling is that one’s body doesn’t want to give into living somewhere new, so I’m going to have to try my hardest to adjust to the eight-hour time difference between here and Ohio.

Despite my obstinate circadian rhythm, we still had another gorgeous drive ahead of us, still making our way through the range of the Southern Alps. Along the way we made a pit stop at a fruit stand where I had to try all things kiwi. Dried kiwi, chocolate-covered kiwi … who knew such things existed. 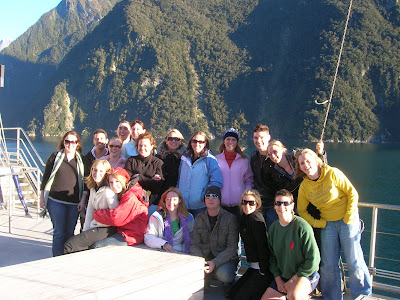 Once we unloaded our gear aboard the Fiordland Navigator, the boat that will be cruising us through the Milford Sound tonight and on into the Tasmanian Sea in the morning, we had the choice of going on either a kayak tour or a motorboat tour of the sound. Because of the nearly 0-degree Celsius weather and not wanting to take any chances in getting drenched, I opted for the motorboat ride. It turned out to be the better choice, because our guide took us within arms reach of a small seal colony. We also tried to see some penguins that nest in the area, but to our disappointment it was too early in the season for them to be out. 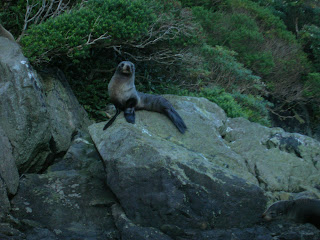 The rest of the night we spent bonding with our Contiki tour mates. We ate some traditional New Zealand food, which included lamb and a dessert called Pavlova. (Though the Aussies claim that sticky meringue treat to be native to their country). We played Pictionary and danced and took some of our first group pictures. And what first appeared to be quite a mellow group began to show its true colors. I can’t wait to see what the next few days in Queenstown – adventure capital of the world – has in store. 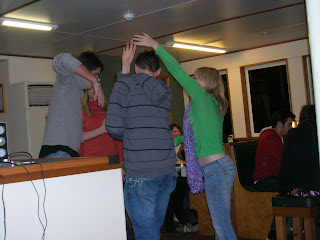