You must not cry… 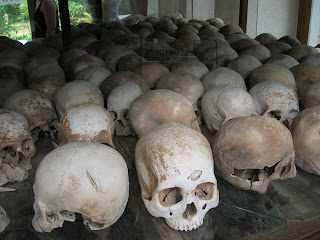 Moving a bit from my what can be considered humorous escapades in adjusting to Cambodian life, I want to touch on a little bit about the country itself. I'm not a history buff, so I'm not going to pretend to be an expert on the things that have plagued Cambodia's past, but I hope to provide some sort of insight to people who might be just as naive as I was about the Cambodian genocide.

My explorations today were both highly educational and emotionally draining. I visited one of the many killing fields scattered around the country as well as S-21, a suburban school that the Khmer Rouge (think of them as the Cambodian Nazis) turned into a prison used for torturing and murdering those they arrested for opposing Ankar. The things I saw today were nauseating -- to think that humans are capable of such sadistic actions. And I think it's unfortunate how many Americans are ignorant about this tiny nation that suffered one of the most brutal examples of human cruelty the world has ever seen.

When I first entered the grounds of Tuol Sleng, the genocide museum set up at the S-21 site, it didn't appear out of the ordinary. Located on a street inside the city, it has a campus of three three-story buildings and courtyards with trees and benches. It looks like a typical Cambodian school. 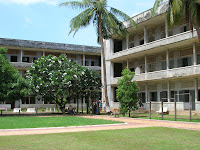 The first thing that really hit me as I began walking through, was a sign that was posted depicting the rules of the prison. Rule No. 6 read:

"While getting lashes or electrification, you must not cry at all."

It wasn't the fact that they were beating or electrocuting people that struck me, as terrible as those things are. It was the "you must not cry" that really sent a chill down my spine. How inhuman. They wanted these prisoners to move and act like little zombies, like puppets. Like people without dignity or souls.

Those words rung through my head as I walked through the classrooms of Building 1 that were transformed into prison chambers. Each room had a bed where victims were chained and tortured. Some of the rooms still had stains on the floor from blood and the museum placed a photograph in each room showing an abused victims. 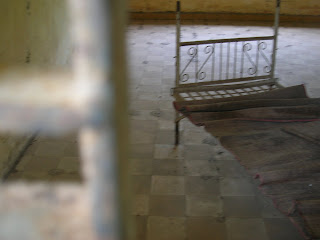 Like the Nazis, the Khmer Rouge expertly documented their victims. Building 2 contained an exhibit displaying many of the mug shots of the prisoners. According to a KR report found at Tuol Sleng, more than 10,000 foreign and Cambodian adults and 2,000 children were held at S-21 between 1975 and 1978. Only 7 survived. 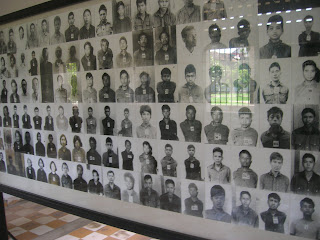 Building 3 held some of the actual torture devices used in the prison and outside stood children's exercise equipment, which was used to hang prisoners by their arms until they passed out, whereupon they'd be dipped head first into cold, mucky water so quickly revived, only to have the process repeated. These people were beaten, shot and other things I don't even care to write or think about.

As I solemnly proceeded to the Killing Field located just outside Phnom Penh, I couldn't help but feel tears for the pain these people endured, and yet they had to endure it without tears. 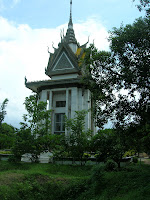 At the field, several mass graves, which once contained the remnants of hundreds of murdered people, surround a monument memorial dedicated to the deceased. Inside the memorial are the skulls of the victims. While display might seem grotesque and unsanctified to those of you reading this, it is an even more controversial issue for the Buddhist Cambodians who feel the remains should not be enclosed in a glass case and should be cremated so that the souls can properly move about, perhaps in preparation for the next reincarnation. 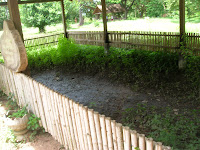 But the display, controversial as it is, burdened me and I'm sure the other visitors as well. To me, it serves not only as a reminder of what happened in Cambodia, but what happened in Eastern Europe and what is happening today in Africa.

Today the effects of the genocide are still visible throughout the country. The people are uneducated. The majority of adults, including those holding government positions, process information at the level of a fifth-grader, and the younger generation, while they are going to college, aren't receiving a degree of much value. People live in poverty, and the poor agricultural technology only contributes to this. And you will hear people say over and over that the government is corrupt. I'm not sure what this means, exactly, but it seems as though moral is low and people have little hope of a better future.
with love from Rachael at 7:46 AM

This is a highly moving and educational blog post. Thank you for putting yourself through the trauma of witnessing the profoundly touching artifacts of this sad, sad history.

Geez, Rach. Powerful stuff. scary how quickly we can turn our backs on instances of genocide. Wonder if people will ever learn.