This page has been lacking in pictures recently, and I regret to inform you that I could not run with my camera so I have no pictures of Angkor Wat. (Let's shed a tear and move on.) Here are some fun pictures from this weekend in Siem Reap, however unrelated to this post, to tide you over.

Musical performance at the night market. 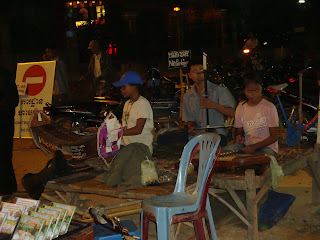 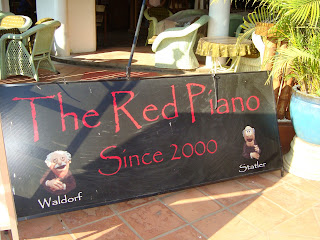 It could potentially be a computer school. 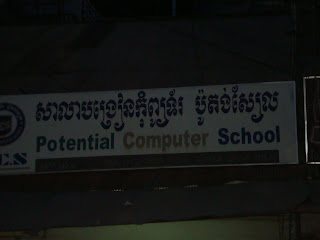 Rach(a)el's and our unconventional beverages -- Coca Cola in a bag and a coconut. 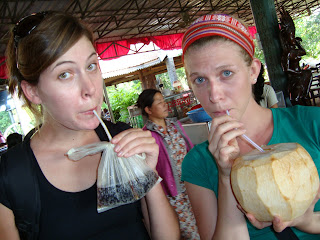 Betsy and I try out our best fish faces. 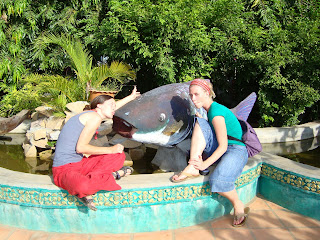 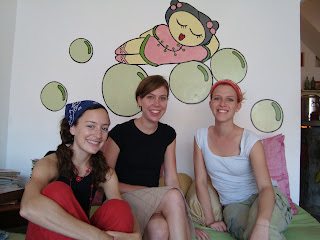 Moving on to the weekend...

My first peek of the ancient structure of Angkor Wat came as the sun unveiled itself behind the temple’s three pointed towers. Unlike most visitors to the ancient structure, this time around, I wouldn’t be preparing my soul for a spiritually fulfilling experience or my eyes for the wonder of the beautifully crafted architecture. Instead, I tightened my laces and stretched my legs in preparation for an early morning 21K.

Coming into the Angkor Wat Half Marathon, I doubted if my body would be able to withstand the endeavor that I’d soon be facing. Having only decided to register for the race less than a month before this moment, I hardly had time to condition my legs for this athletic test, but if they guy pounding the red dirt pavement in his bare feet or the characters dressed in tiger, bear and rhino mascot costumes could do it, so could I.

The Challenge of the Open Road
Really, the hardest part of my journey this weekend, was the actual logistics of getting up to Siem Reap. Traveling in Cambodia, you quickly learn to take things in stride. Whether you have to deal with an overcrowded vehicle or a broken down bus, the key is to remember there’s no rush in getting to your destination and that, eventually, you will arrive.

So my travel buddies – Rachel, Betsy, Emily and Charlotte – and I arrived at the bus station at a bright and early 7 a.m. on Saturday. Pumped for the weekend, we held no worries of securing our seats on the bus, given that we had bought our tickets the previous Monday. Well, much to our surprise that when we boarded the bus, our tickets did not list the Saturday’s date that we had asked for. We were supposed to be on yesterday’s bus and this one had no room.

Trying to convince the bus company of their error, we attempted to get our money back so we could find some other mode of transportation. However, as things go, rationality and customer service flew (rather bolted) out the window, and we only received a little over half a refund.

Taking what we could get, we five girls flagged down a share taxi (a.k.a. a tired Toyota Camry), piled in and set off for the open road – a mere hour and half after our expected departure.

Pit Stop Adventures
Four girls squeezed into the back of a mid-size sedan made for quite the bonding experience. How better to get to know your travel buddy than by drooling on her head during a mid-trip nap or by jabbing her in the chest with your elbow. No, we were quite cozy, actually, though our pit stop was much welcomed. 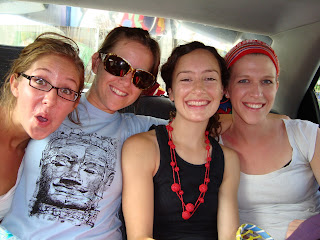 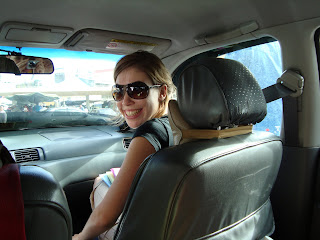 It’s always interesting the snacks you can find at these side-of-the-highway restaurants. The food tends to be more nutritious and more, um… organic… than the typical fast food joints of the States. Take for instance, the fried tarantulas. Full of protein and absolutely no preservatives. If you need proof of their authenticity, just check out the bucket of live hairy crawly things next to snack platter. (I even gave holding one a try. Eek!) 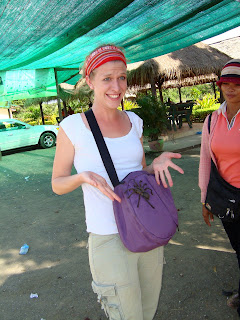 Foregoing the tasty arachnids, we all agreed our new favorite snack was the natural fruit roll-ups we discovered. The bananas pressed into paper-thin sheets were reminiscent of a favorite childhood treat, but much healthier. A great find, given we needed to load up on carbs and potassium for the next days run.

The Race
What a fantastic way to experience a new place! The cool morning air and the shade of the trees made for the perfect running conditions. There was something Cambodian about the whole experience, running by the ancient ruins and huge Buddha statutes. In the moments when I felt fatigued (my fault for not properly training), the temple kids came out and cheered and extending high fives.

Elephants greeted us as we approached the final 5K. Although they were topped with tourists and not some sort of special ceremonial gesture, they did seem to bring that bit of luck to finish the race. And when else can you say you ran a half marathon with elephants?!

Crossing the line at 2 hours and 15 minutes, I'd say my first international run was a success. Check out our sweaty selves below. 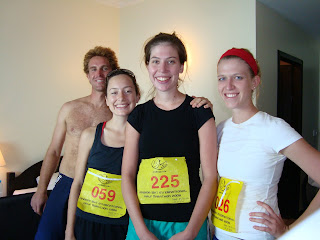 Whew! Sounds like quite the weekend! One of these days I'm going to enjoy a crazy, great weekend :)

By the end of this trip you'll be able to look at a photo of any animal and say "yeah, I tried that." he he