Yesterday was Human Rights day. I didn't spend the day contemplating the inalienable intangibles that each of us as creatures in the human race deserve, but I did wade a little deeper into Cambodian culture, so that, I suppose, can serve as my celebration of humanity.

One of the guys who works in the administration office at UC is leaving, so he invited a bunch of us to his house in the countryside. (Where he lives in the "countryside," which sounds so remote, is not far, maybe 15K outside Phnom Penh.) There were maybe 10 of us and we cooked lunch and hung out. It was fun, especially since I haven't really had the chance to get to know many of the people at UC that I see everyday. 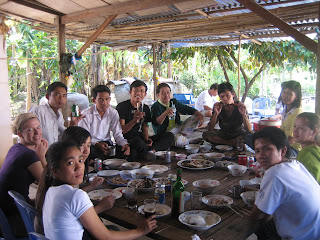 Most of the time I didn't understand the conversation, considering most of the time it was in Khmer, but it's funny to think about how much of the story you get from interpreting body language. It's like watching an opera or a ballet or a movie in another language. You don't have to understand the words to get the gist of the story. You can see peoples personalities shine through their actions - the funny guy who is the center of attention, the clique-ish girls, the caretaker, the thinker. I even found myself laughing at jokes that I didn't here the words too. Strange, isn't it? 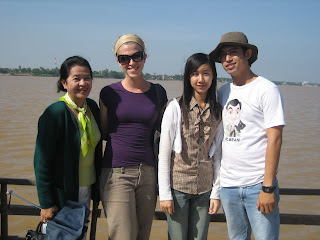 Then the group crossed the river to Koh Dath (Dath Island) where silk garments are produced. I really wasn't interested in buying fabric, but I did venture out to a rice farm. The rice crop is still green and against the clear blue sky, it made for a beautiful picture. I ended up buying rice and tomatoes of the family who owns the farm because they were so sweet. (And because I'm eager to use the new rice cooker I inherited from a homeward-bound friend.) Again, I couldn't understand them, but they were so genuine and welcoming. They asked me to come back and visit them and I hope I can. Getting out of the city is so nice! 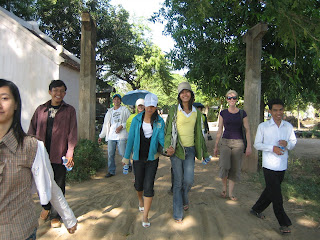 Sidebar:
Here's the pic Emily shot of me crossing the finish line at Angkor Wat. Why can't I look athletic instead of ill when I run? 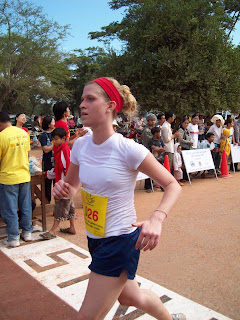 You DO look athletic! If you had lots of energy and a grin on your face, then we'd all know you didn't give the race your all. That is the face of someone who gave the run everything she had. Congrats girl! I'm so jealous you've run a half in another country.