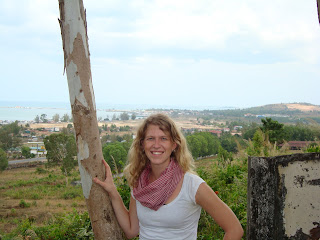 As Emily put it, I went all Elizabeth Gilbert (author of Eat, Pray, Love) on everyone this weekend and attended a silent retreat. Of course my day of silence with the Roman Catholics in Kompong Som hardly compares to the intensity of four months in an Indian ashram, but it was a small dose of spiritual meditation that I needed to keep myself from going insane with the frustrations that build up each day in Phnom Penh.

I probably went into the weekend with too high of hopes. I've constantly fretted for nearly two years now about what to do with my post-college life and I thought that maybe this would be the weekend of my enlightenment.

The weekend wasn't a total loss, though. As I said, I went into the weekend with surmounting frustrations - not just about the future of my life but about my purpose in Cambodia. Not attached to a powerful NGO making strides in helping the country develop, at times I feel like I'm here wasting space, responding to the nonsensical whims of the university president.

So on the day of silence - Saturday - I spent most of my time turning the thoughts in my head over and over. I wouldn't go so far as to say the silence was deafening or maddening, as some might exaggerate, but I definitely couldn't find the relaxation or easiness in it. My insides felt chaotic and my nerves were wracked (most likely a bi-product of they way I've felt for the past couple months). I've never been one to live in the moment, and the stillness only allowed my brain to bounce more easily back and forth between the past and the future and dwell on the bitterness that's grown in me while in Cambodia.

Finally, Saturday evening I had a breakthrough. Father Charlie, who led the sessions, asked us to reflect on how we react to suffering - our own and those around us. That's when it came to me. I realized that I'm growing increasingly frustrated, that frustration turning into bitterness, because I tend to react to suffering by becoming reclusive. I see the suffering of those around me and because I can't do anything about it and don't want to make a scene by being emotional about it, keep my thoughts and feelings to myself. That causes me to suffer, and again, I repress those feelings because I have it so much better than those around me, why should I complain?

I feel that's when I realized my purpose in Cambodia. Yes, I want to impact the people around me and "make a difference" here, and in a small way I am by interacting with people at the university and working with the kids from the dump. But given my capacity, coming here alone and working for a government official, I'm not going to do a whole lot. However, I am learning a lot. I'm gaining a hands-on awareness of the world's injustices and acquiring a realization of what steps I need to take to one day effectively affect change.

I'm here to learn. It's a difficult purpose given that I like to see things get done. That's about as far as I got this weekend. I could have used another day of silence - maybe several - but perhaps the opportunity will arise at another time. 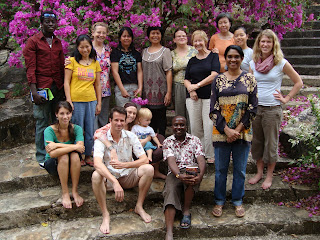 I was raised in a Roman Catholic church, and I don't think that in all those years I ever found enlightenment :). What you need is a good meditation cd and a quiet room. :)