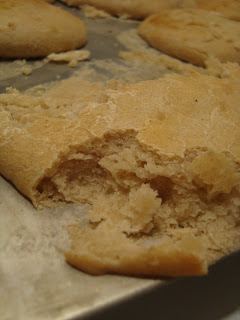 Yesterday, I was going to bake boller, a favorite Norwegian snack, akin to the likeness of the American chocolate chip cookie. I had this whimsical idea in my mind that I would fashion these sweet cardamom rolls from yeast and flour and sugar and the oh-so-beautiful-smelling cardamom. (It really has a lovely scent!) Then I would share my scrumptious creations, and people would oh and ah as they nibbled on the rolls topped with butter or honey.

If only such dreams of whimsy came true.

My first err in action came when I decided this would be a fun project to start at 9 p.m. The second came when I opted not to look carefully at the recipe before diving into action.

The first ingredient in the recipe called for 2 1/2 cups warm milk. I'm not much of a milk drinker, so when I know I'm going to be baking, I'll buy a pint so it doesn't go bad. Well, during my last trip to the grocery store, I thought I'd be extra conservation-minded, and pick up the smallest container of milk they had - as I found out shortly before mixing my ingredients, it was a half a cup too short.

No biggie. I quickly zipped over to the gas station, supplemented my supply, and continued with my baking endeavor. Or so I thought.

I began heating the milk, started mixing the yeast and sugar, melting the butter, and then I looked at the next ingredient: Oh crap! The recipe called for 5 1/2 cups flour. A sinking feeling overtook me as I recalled my last baking project gone awry (lemon bars that never set) that depleted my stash. I donned my shoes and jacket for another trip out to the store.

Once I had my all-purpose flour in hand, I continued with my baking.

"... mix together the warm milk, melted butter, sugar, and yeast. Allow to stand for about 10 minutes, until the yeast is good and foamy," the recipe said.

Cool! A science experiment, too! I mixed the ingredients and waited for the yeast to foam.

And I waited some more.

Feeling like I was watching the pot that would never boil, my impatience got the best of me and I continued on.

Everything was finally mixed together and the recipe told me to wait an hour for the dough to rise twice its size. (See where my second mistake is coming into play?) I sigh, but at this point there's not much I can do; I'm committed. I put the bowl near the warm vent, covered it with a towel and began waiting (again).

Partway through my waiting, I took a peek under the towel to see science in action.

The dough wasn''t rising. In fact, I think it shrunk a little.

Intent on persevering through this expedition in Norwegian baking, I let the remainder of the hour take its toll and continued on. Following the recipe (which at this point wasn't going so well) I punched my unrisen dough. My hand was now covered in ooey gooeyness. (Not quite the "slightly sticky" texture I was supposed to aim for.)

I tried to knead the dough, but my attempts were futile as my dough began to resemble something more like The Blob of the late 50s horror film than future pastries.

Hoping for a bit salvation, I threw some more flour into the mix. (And a little more. And yet a little more.) Maybe it was working. (Or maybe not.) Either way, it was approaching midnight and I had to finish these damn rolls.

The recipe said to roll the dough into balls slightly bigger than golf balls and let them sit for another 30 to 45 minutes. My golf balls looked something like this: 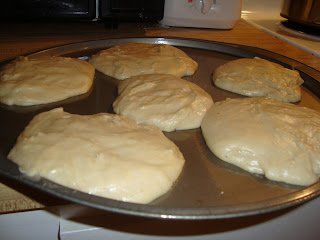 And perhaps only because I like to make myself suffer, I waited out the 30 to 45 minutes. At that point, right before I put the cardamom roll wannabes into the oven, they still looked like this: 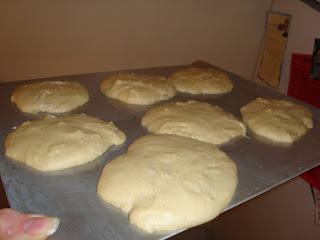 Twenty minutes later, I had this: 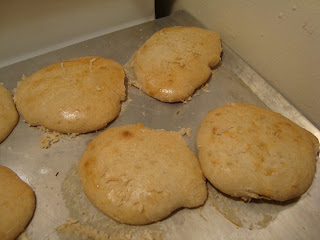 The second batch was kind and attempted to rise for me: 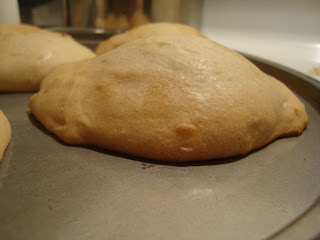 And I'll tell you what: Once 1 a.m. rolled around, they didn't taste half bad ... maybe just a little dense. (Ok, today they just tasted soggy and I'm probably going to throw them out.)

Hi Rachael! I just wanted to say, I'm sorry the batch of boller didn't work out, and I wanted to let you know that at least the first three times I tried to make them without my mother there to supervise, I too made batches that didn't rise - I somehow kept managing to kill the yeast, and they turned out like cardamom rocks! It can be oddly tricky to get the temperature right for the liquids, that is warm, but not hot - just a bit warmer than body temperature. Also, I have sometimes had trouble using old yeast. I don't know how fresh yours was. But, I hope you aren't forever scarred and will try again sometime! :)

haha. This is your best post yet. I am the queen of failures in the kitchen. Glad to know that I am not alone. (Maybe you should try them again though and learn from your two mistakes!)

No worries, I will definitely be trying this recipe again. The cardamom just smelled too lovely not too! It was also my first time with yeast, so I'll learn from my mistakes. (I think the milk was too hot ... maybe I need a thermometer.)

Cooking with yeast definitely takes some practice. Especially depending on the weather in your area. Good luck on the next attempt!

Hey Rach, I hope this isn't bloggy chain mail, but I gave your blog an award. Stop by mine to read about it!