Our first TASTE of Europe...

We were wrong. So our tour manager, Pete, actually did plan a tour of the city for today, so I got another peek at London’s finest. It kind of sucks that I spent £18 yesterday for a long, hot day that showed me less than this complementary tour, but that’s life I guess. In the end, I’m not really all that disappointed, because if I had missed out on all these amazing sites, I would have been pretty bummed. Now I’m just that much more knowledgeable in British tourism. Haha. 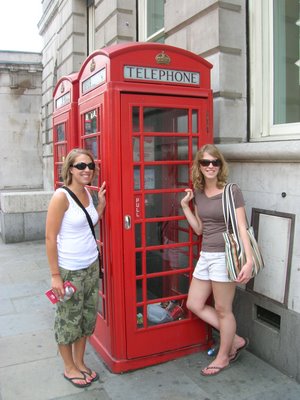 Well, after today’s tour (and a lot of great trivial information from Pete), I walked around with a group of people. First we stopped in at Pret a Manger, a sandwich chain, for a bite to eat. Sandwiches are a huge thing over here I’ve found. Then we traveled by foot in the “bloody” heat. So apparently we are witnessing the biggest heat wave London’s seen since 1913. Way to witness history firsthand. YES! (And without room air conditioning. DOUBLE YES!) We saw some telephone booths, witnessed a protest (something about seals), and watched people lounging in parks trying desperately to escape the heat under the shade of trees. The biggest thing that surprises me about London is how clean it is. There are no ‘rubbish cans,’ as they like to call them, anywhere, yet the streets are completely rubbish free. It’s amazing. (Well, there was that one telephone booth…)

After our free time, we met up with the big group for our (FREE) traditional English meal at Porter’s, complete with appetizer, entrée and dessert. So I hear this rumor that England isn’t known for their food… Hmmm. Well, our dinner wasn’t too bad. I started off with fried mushrooms, moved onto chicken and broccoli pie and then finished my meal with some sort of fruit sponge pudding thing. I’ll have to say it was no fish and chips (the pie had a funny taste to it… curry I think) but the rest was great! (And so free!) 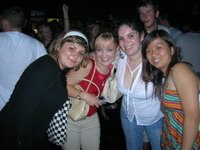 Afterwards, about half of us went to a Contiki-sponsored battle of the bands competition. Great music. Great fun. I’ve decided my favorite Brit drink is Strongbow, a hard cider. It’s highly refreshing and I highly recommend it for anyone willing to stray away from your typical beer. We rode home in one of London’s famous black taxis, and yes they do live up to their fame. Did you know that these drivers can be fined and sent off the road if there’s so much as a tiny scratch found in their exterior polish? No joke. 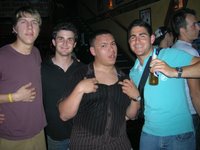 Well, it’s been an awesome two days and tomorrow we’re off to Europe! (Because apparently here we don’t consider Great Britain part of Europe.) Better rest up!

Cheers!
with love from Rachael at 8:25 PM