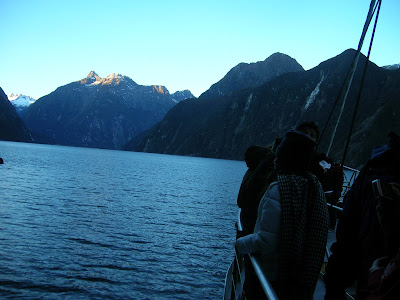 It’s only slightly past 10 a.m., but I already feel as though I’ve had a day’s worth of adventure and excitement. I woke up this morning at 7:00 to a blanket of darkness and made my way up to the top deck for breakfast.

I sat with some Aussies who introduced me to their beloved condiment Vegamite. Having heard from people (mainly Americans) about how gross this spread made out of the yeast leftover from beer production is, I had to find out for myself what all the fuss is about. Saying that the reason Americans disdain this Australian original is because of the amounts in which they use the spread, he prepared me a piece of toast with the perfection only an Aussie can achieve – an extremely thin layer of Vegamite over a thick slather of butter.

I can’t say that it was the best thing I’ve ever tried, but it definitely wasn’t as bad as people make it out to be. It’s more of an acquired taste, I’d say. 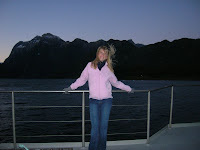 We then headed outside and were greeted by a beautiful sunrise over the Tasmanian Sea. Because the wind began to pick up, the crew unleashed the ship’s sails and we were traveling in style. However, soon that same wind began nipping through my five layers, shooing me back inside the observation cabin for a bit.

I couldn’t stay in long though as we approached more of the natural beauty of the area. Waterfalls and bottle-nose dolphins were this morning’s treat. It was my first experience seeing the dolphins so close, so I delighted in the scene of them playfully surfing the waves the ship made. I believe I counted at least seven or eight that followed us at one point. 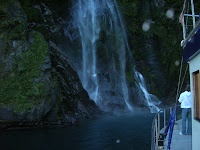 Now, we head into Queenstown. Tonight we plan on cheering along the All Blacks, New Zealand’s national rugby team. Marian, Kelly and I hope to find a local pub that will aid us in participating in the festivities of the night.

So long for now.
with love from Rachael at 5:34 PM