Let’s see. Where did I leave off yesterday? Ah yes, just heading out of Milford Sound…

On the way here to Queenstown we stopped at A.J. Hackett Bungee, the first bungee bridge in the world. Although I was too chicken to make the big plunge, I eagerly cheered along my more courageous friends who dared to make the jump. This, as I soon found out, was just a taste of what the next day and a half would bring.

Making our way into this bustling winter village, we happened across ski bunnies dressed in their warmest jackets and snow pants and hostels on every corner extending a warm welcome to passing backpackers.

Wanting to jump into the action, Kelly, Marian and I decide to find a hot spot to catch the All Blacks game, but it seemed as though everyone else in town had the same idea. All the bars were packed, so we decided to rearrange our plans, and we grabbed dinner at Fergberger (gigantic burgers!) and then caught the end of New Zealand’s victory over Australia. 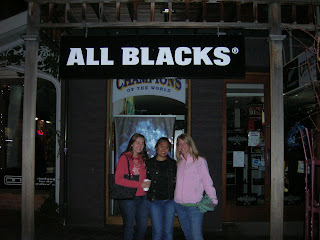 We finished out the evening by meeting up with the rest of our tour at some dance clubs. However, I ducked out fairly early so I could try to get a little rest for today’s activities, the highlight of which involved….

JUMPING OUT OF A PLANE!!!

I may have been completely exhausted – the sheer anticipation and the loud guests in the lodge keeping me up late last night – but I did it! I faced my greatest fear … and survived.

I don’t know how to describe the experience. It all went so fast I barely had time to be scared. After getting suited up, my jumping partners Gemma from Shefield, UK, and Mitchell from Australia, our tandem instructors and our photographers piled into a seatless plane specially designed for our courageous feat and ascended 12,000 km. 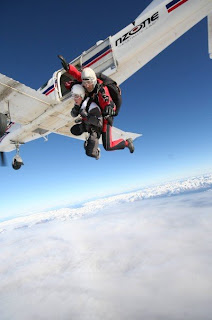 Sasa, my instructor and manager of N-Zone, has done more jumps than anyone at the company, giving me confidence my own jump, which is a good thing because he hardly talked to me through the whole trip. Basically it went like this: he shoved me into the plane, harnessed us together, shoved my hat on, and then once we hit 12,000 km., shoved me out of the plane to free fall through the air at 200 k/min. (That’s terminal velocity my friends.)

I’m sure if I hadn’t been screaming and whooping through the whole thing, I would have completely forgotten to breathe. The cold air made it difficult to catch my breath, but it was barely a concern. My senses were overwhelmed with the air rushing past my ears, the pressure of the fall against my body and a birds eye view the snowcapped mountains below as we emerged through the clouds. 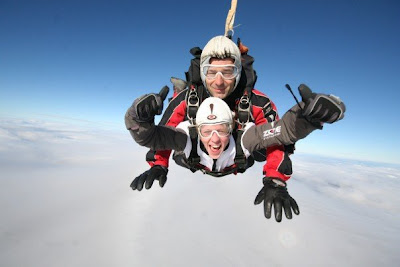 We tumbled a bit after the initial jump, I think, but it’s so difficult to recall. My photographer was awesome, aside from taking some sweet pics. As we were about to do the jump, he climbed out of the plane ahead of Sasa and me and hung onto the plane until we jumped. He then followed us, snapping photos and helping us do spins.

The parachute was launched after only 35 to 45 seconds but it felt as short as 10. As it opened, it jerked our bodies into a more vertical position. It didn’t seem like it, but I think even with the chute opened we fell pretty fast, because once we neared the ground it rose to us quickly. Just as fast as I was up in the air, my feet were back on solid ground. It was an absolutely fantastic experience and I’d do it again in a heartbeat.

Still high from the jump, Gemma and I grabbed lunch together. She just graduated from university and wants to be an actress – maybe. She’s in the same boat as me. Unsure of how she fits into real world and would prefer to spend her time traveling the world.

Well, as fun as the day has been, life on a Contiki never pauses, so I’m off to get ready for the evenings activities.
with love from Rachael at 5:44 PM