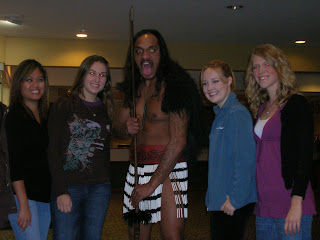 Today the rain will not stop, which is unfortunate because we did so much today. We left Lake Taupo around 9:00 a.m. and along the way stopped at a bubbling mud site and Huka Falls. This area is home to thermal grounds, which makes from some really cool natural activities, but some really rank smells (due to all the sulfur in the air).

Our next stop was called Te Puia, a replicated Maori village. It was a little cheesy, but a good way to learn about the Maori people, New Zealand tribes that originated from the Polynesian islands. We got to learn about their weapons and instruments and also got to see geysers and kiwi birds. They are flightless birds that only come out at night to eat and sleep 18 hours a day. Te Puia probably would have been a cooler site if it hadn’t been pouring today, but the rain kind of dampened our parade. 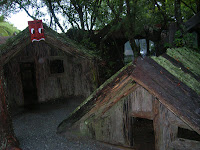 Afterwards, we grabbed lunch and made our way to tonight’s lodging site – which, by the way, was a hostel and not exactly my idea of being up to par with the other Contiki accommodations. We had some free time, so I took showered and napped to prepare for tonight’s festivities – the hangi and Maori cultural show. 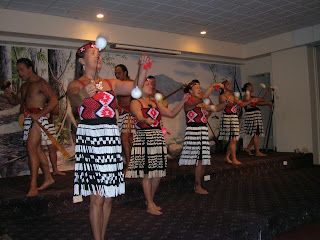 Again, the cultural show was a little cheesy, being performed in a banquet room of a hotel, but at the same time gave us the opportunity to learn more about the Maori people. The food, which was awesome, was served buffet style and the Maori call the feast a 'hangi.' I ate fish, lamb, venison, chicken, mussels, potatoes, sweet potatoes, salad and pastas. It was delicious, especially washed down with a glass of pinot noir. The show wasn’t bad either. The performers had beautiful voices, singing songs that closely resemble the Hawaiian songs that Americans are more familiar with.

- Only 5 percent of Maori are full-blooded Maori
- The Haka is a war preparation that uses every muscle in the body including the tongue and eyeballs. (It was popularized worldwide by the All Blacks pre-game performance.)
- Women do dances with pui balls hooked to a string that they swing around.
with love from Rachael at 2:16 PM