The big, the bad and the scientific. 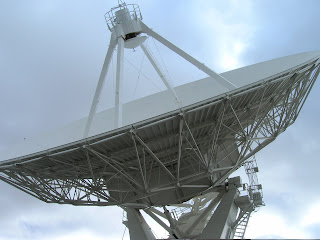 Unlike the past couple days, today we had much to see – though I’d say we followed somewhat of an extraterrestrial (or perhaps just scientific) theme.

Our first stop, not much more than an hour out of Socorro, was the Very Large Array (VLA) of radio telescopes. These galaxy-seeking devices about 5,000 square feet large (more than twice the size of your average house, which runs about 2,000 square feet) are set up in the middle of the desert. At their farthest, the 27 telescopes are spread out the size of Washington, D.C. and are arranged in the shape of a large Y, but can be moved around by railroad tracks that run beside them.

I’m not much into science, but to see these humongous telescopes all lined up, spread for miles and facing the same direction was quite fascinating. 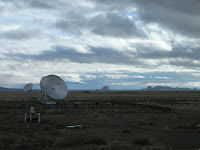 Our next stop along the way was the Petrified Forest and Painted Desert National Park. The area there was surreal because everything looked dead but beautiful all at the same time.

We stopped at a site called Crystal Forest (apparently because crystals could once be found on this stretch of land) where logs of petrified wood have been laying for thousands of years. 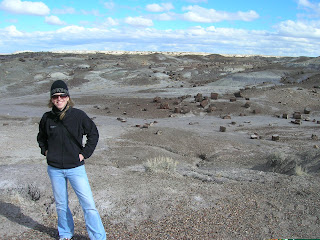 As we drove through the park, the scenery was amazing. Sedimentary rock formations boasted layers of red, blue and orange, unlike anything I’ve seen in the east. Dried up rivers ran along the side of the road. The area was so dry but so vast. It was incredible to take in! 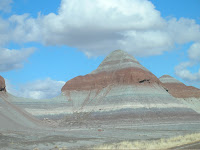 Our last stop out of the park was a tribute to Route 66, which ran along the area. Because we won’t make it to the real Route 66 on this trip, it will have to do. 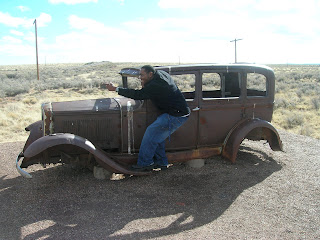 Our final stop before reaching our destination was the meteor crater. Basically, it is a big hole in the ground – three-quarters of a mile in diameter and as deep as the Washington Monument is tall. A meteor crash caused it nearly 40,000 years ago, but throughout time that has been up for debate because it was also thought to have been caused by a volcanic explosion. 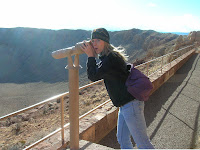 The museum at the crater was interesting though because it touched on various meteor strikes throughout history – with only one case reporting to have caused human injury. 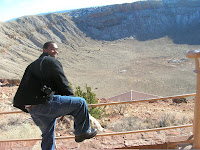 So I would say I learned a lot today. We’ve also experienced huge gusts of wind, which we learned is common to these parts during the winter months. Other than that the weather has been nice with fairly clear skies. In New Mexico they get sun 360 days a year – how lucky! Only once we hit Flagstaff did we run into snow. I’d say it’s reached about 3 to 5 inches.

We’ll see how much we get to see of the Grand Canyon tomorrow…
with love from Rachael at 6:13 PM