The Wild West - out of this world. 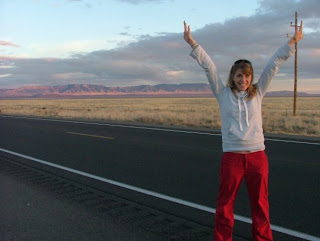 Today consisted of a lot of LOOONG, FLAAAT driving. And because Eric still didn’t feel up to par, I performed all nine hours of driving by myself. It wasn’t really all that bad. As he slept, I put an ear bud of my iPod in one ear and drove 90 m.p.h. on the long and narrow. We traveled through Oklahoma; Amarillo, Texas; and New Mexico.

It was interesting to see the changes in landscape as we drove. The Oklahoma landscape, not being all that different from what you see in Ohio, got flatter and flatter as we progressed. Texas was about the most boring stretch, but to my excitement we saw a real life tumbleweed! Yeehah!
We also passed the largest cross in the western hemisphere, reflecting the spirit of the Bible belt region.

Once in New Mexico, the dirt turned red, and though we still encountered flat lands, the drive became much more scenic. The land is just so vast it was nearly impossible to comprehend. Spiny, round bushes (which we tried to determine whether they were cacti) dotted the orange and yellow horizon. In the distance stood bluish purple hills, and soon enough we found ourselves driving through them along a scenic highway. The hills were perfectly symmetrical cones, as if a child on the beach were making sand mounds – only a hundred times bigger.

We drove through the hills just as the sun began setting and it was a perfect snapshot of the west. We even parked the car along the side of the highway for a bit to take pictures. The quiet of the open space was close to pure bliss. I can think of no other words to describe it than absolutely beautiful. 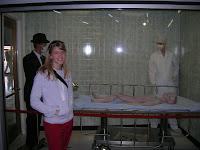 We broke up our drive with a stop in Roswell – alien capital of the U.S. Let me tell you, it was nothing special. The town itself is nothing – about the size of Lancaster, Ohio. We visited the international UFO Museum and Research Center, a hodgepodge of documents trying to prove aliens exist. Displayed in an illogical, chaotic fashion, they did less than convince me. In my opinion, the only people who would enjoy the site are true alien conspires.

Tomorrow we get to see more and should make for an exciting day.
with love from Rachael at 6:05 PM