Learning the Art of Khmer Cuisine 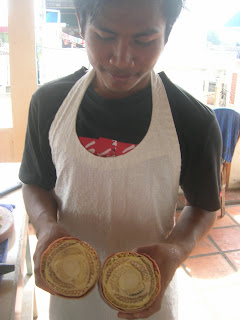 I was reading a New York Times article this week about the rising trend of underground restaurants. I (apparently akin to some New Yorkers) am growing tired of meals served by a waiter in a not-so-intimate environment, so this weekend I sought out my own form of alternative dining.

Missing the comforts of a kitchen, I signed up for a cooking class at Fizz Restaurant, nestled among the European influenced boutiques in the outskirts of the arts district. I hoped not only to delve into the art of Khmer cuisine, but eat some good food and meet some new people along the way.

Ironically enough, I was the only student of the day (negating my hopes of meeting new people), but this in itself was a treat, as I got my own private cooking lesson with Heng.

We started off the day with trip to the market. If you want to learn anything about a country, visit the local marketplace. Vibrant with colors of dragonfruit, lychees, soursop and citrus fruit; alive with smells of butchered meat, fresh cut flowers and sweaty bodies; bustling with activity of locals bargaining for a buy and vendors trying to make a sale -- you can get a real sense of the culture and lifestyle of the people.

Heng and I squeezed our way past stands where raw beef and pork hung on hooks above patties of chicken's blood and past baskets of freshly caught fish and frogs that were skinned so recently they still "hopped." Beside a woman selling braids of noodles of all shapes and sizes, we stopped at a vendor of vegetables and herbs, where Heng showed me the different ingredients the Khmer will add to their food to give it the distinct flavor that makes this region unique. Mint and basil, tumeric, gingseng, lemongrass, and a variety of leafy greens.

Then it was onward to the rooftop kitchen, where we started the burners and put our culinary skills to work. Being that I was the only student, I got to pick and choose the menu from what is typically offered at the two courses Heng teaches. I chose: 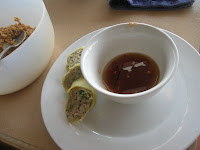 *Saing Jayk: A chicken-pork-herb mixture ground to the consistency of a sausage, wrapped in a banana leaf and deep fried. 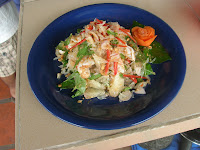 *Pomello Salad: A spicy combination of pomello pulp, mixed herbs and shrimp topped with a sweet and sour dressing 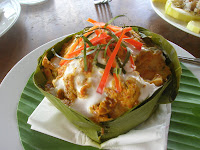 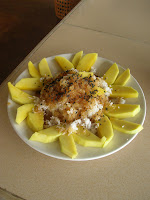 *Mangoes and Sticky Rice: topped with roasted coconut and a caramel drizzle (my most favorite dessert in all of Asia!)

I've noticed, in general, that Khmer food tends to be fairly salty. Heng explained that cooks add salt to the foods to allows people bodies to replenish the sodium lost through sweating. But during the creation process, I discovered some new spices that, perhaps, I'll be able to incorporate in some of my own dishes.

One of my favorite ingredients we used was the palm sugar. It's thicker than honey but moister than brown sugar -- combine the two and you probably will end up with the consistency of palm sugar. It's not as sweet as normal sugar and we used it in just about every recipe. It also makes a delicious treat for people like me who find gross things like peanut butter on a spoon a good snack.

Another of my favorite ingredients we used -- the chili peppers. It's the perfect flavoring for any dish that needs a little pizazz. I also found the use of coconut milk interesting. Because dairy products here are rare, we used it to create the topping for the amok and the caramel glaze for the mangoes and sticky rice.

I also learned some techniques that could take my cooking past "marinating a chicken breast with canned salsa" or "boiling a box of pasta and pouring sauce over top." 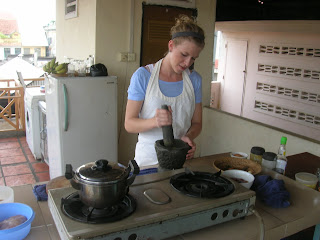 I will definitely want to invest in a mortar and pestle, a kitchen gadget I've always been intrigued with but never saw a use for. We used the device to grind up all our spices, be it garlic, peppers, lemon grass or tumeric. Although skilled dicing or a vegetable processor could work easily as well in most cases, the mortar and pestle was a necessarily element to the creation of the curry paste used in the amok. (Yes, I made my own curry!!)

And little did I know, you can cook shrimp, not with heat, but by drowning the meat in lime juice. Does anyone know, is this how sushi is "cooked?" 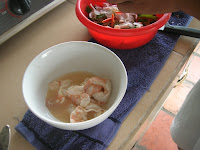 There is one skill among my collected repertoire, however, that will most likely lay dormant. I learned to carve flowers and leaves out of carrots, and as you can see, my flower on the right looks like it's wilting. I neither have the patience nor the desire to hone my talent for vegetable sculptures, but I do appreciate the work of skilled craftsmen like Heng. 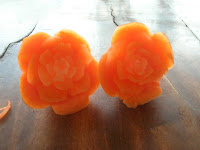 As a reward for our toiling in the kitchen (ok, I exaggerate -- it was a lot of fun), Heng and I sat down to enjoy what turned out to be a rather large meal and chatted about food and life. Heng got into cooking after coming to Phnom Penh on his own when he was 10 years old. He lived on the streets for a year and then got training as a cook at an NGO. Because its easy to get a job as a cook, he said, he could then earn enough money to learn English and attend school. (His English, by the way, is impeccable.) Now, as a 21-year-old, Heng is trying to go to Australia or New Zealand to study business. He was also "adopted" by an American couple who help him pay for his education, though, he said he won't quit his job because he didn't think it was fair to take the money and not work for it as well. He was truly an inspiring individual to talk with.
with love from Rachael at 2:15 AM

Your cooking class sounds amazing! I have always wanted to take a cooking class. I am so jealous! I hope you are able to take more.

I don't cook (or at least not well at all) but I'm inspired to try after reading about your food. Sounds like a great experience!

That's awesome! And I like your wilted flower. BTW, you made me super hungry, thanks a lot!

The food looks great, Rach. You will have to teach me when you get back!