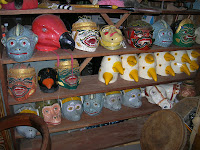 So the rain put a damper on my yesterday (although I did replace my hair straightener), keeping me from doing too much exploring. Well, I certainly made up for it today.

The whole adventuring on my own thing is new to me. I usually like to share new experiences with others - trying new things together, in my opinion, creates a unique bond between two people - but I kind of liked the opportunity to be alone with my thoughts and perceive life as it is here without any outside influence.

I started my morning with a trek to the Apsara Arts Association, located in the northwest corner of the city. AAA is a NGO that began in 1998 as a way to provide training in classical dance, music and theater to kids, free of charge. They allow visitors come and watch the dance rehearsals and then put on a performance on Saturday nights. 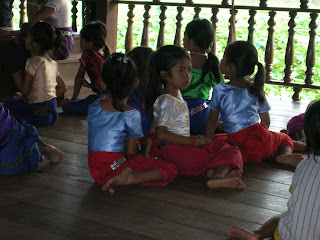 The children were darling and watching the rehearsal took me back to my ballet days. I took several videos. This one is my favorite if you want to get a taste of what classical dance is like:

While the kids went on a break from rehearsal I began talking with a guy named Yon about dance and music. He explained that the country has three kinds of dance. Classical, which is what the school teaches, was invented by the king and is typically done by girls and women - although more male roles are incorporated into today's programs. Traditional dance is created by the different groups of people around the country and both men and women partake in this kind of dance. Then there is popular dance. 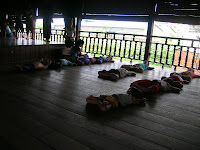 Then Yon taught gave me a lesson the Tro Ou. It's the most commonly played instrument in the country. It kind of works like a violin, but it only has two strings. You also stand it up in your lap and use three fingers to switch between notes. 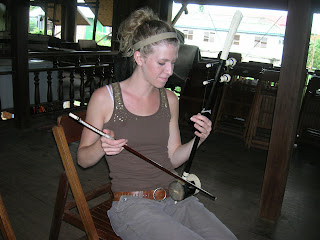 I was horribly awkward at trying to hold it, let alone play it. But Yon gave me a demonstration. (Sorry, I forgot I can't turn the camera vertical for videos.) He's not bad, right?

After my music lesson, I decided to treat myself to a massage. (I might as well take advantage of the $6 an hour.) I went to a place called Seeing Hands Massage, which I read about several times before I came to Cambodia. It's a facility that trains the blind in shiatsu and reflexology and all the profits benefit the blind community.

I think both of these organizations are great examples in a society that is so apt to kick the poor and suffering to the curb. They are helping people find meaning and purpose in their lives, which is something the people in this impoverished country seem to lack.

Anyway, off my soapbox... I spent the rest of my day wandering around the edge of the Tonle Saap River, a real touristy area. I realized just how small everything is. I think I'm finally beginning to figure out directions. I need to rent a bike or something, and do circles around the city just to be sure. 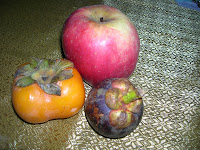 I did buy some fruit. I bought apples, mangosteen and some other fruit that I don't know what it is, but I tried it and it was good. I need to figure out how to eat the mangostein... (If anyone knows, do share!)
with love from Rachael at 8:06 AM

Pretty cool! Looks like your making this a great trip, way to be adventurous!

For the mangosteen, cut it about one centimeter deep around the middle... The entire fruit will open up and you will see this amazing white fleshy fruit in the center. Lift it out and eat it piece by delicious piece.