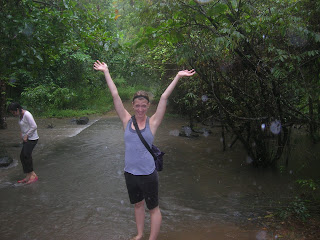 Sorry for my lack of posting. Cambodia is catching up to me. About that Vietnam trip...

So I was on a bus heading toward the Cambodia/Vietnam border when I realized I didn't know how I was going to recognize the people I was supposed to meet in Saigon. Nguyet, one of my closest and dearest friends, awesomely set it up for me that I would stay with her Aunt Chieu in a suburb outside Saigon called Bien Hoa and that the family would hire a translator so we could talk with each other. However, amid the commotion of setting up my travel plans and finishing some work before heading on a long weekend, I forgot to ask how I'd know the people I was supposed to meet.

Thus you have my first example of my Vietnamese, "go to the flow" experience.

"Go to the flow" quickly became my interpretor (not to be confused with translator, he told me) An's favorite American phrase. I taught it to him when he asked me how I would describe my character and why I wasn't sad to be alone in Vietnam. "I try to go with the flow," I told him. "Like a river." My philosophy paid off as I quickly recognized my Vietnamese aunt when a woman who looked strikingly like Nguyet's mother excitedly ran towards me waving a red rose. Disaster averted.

Considering the language barrier, I knew going into this trip I'd have to take things as they came, so I didn't really plan ahead for anything I wanted to see or do. (Basically, my only goal was to eat good food, and in that I succeeded.) As we were sitting in the living room my first night in Bien Hoa, An and the family asked me what I wanted to see. Leafing through my Lonely Planet, I thought a trip to Cat Tien National Park would be cool, so Aunt Chien set up a trip for us. 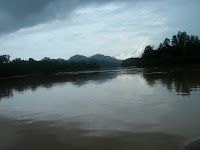 Well, I didn't really take into account the rainy season. As is my luck every time I travel outside Phnom Penh, we get caught up in usually damp weather. As the clouds hung low when we began piling into the car to head to the park, I didn't want to say "Maybe we should try this another day that doesn't look so gray," because that message itself would have taken nearly an hour to convey, so I rolled with it.

Result: trapsing wildly about Vietnamese forests in the pouring rain, plastic bags on our heads, pulling leeches off our legs. "Kong mai," An told me. "You're unlucky." 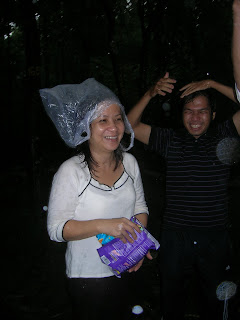 That evening in the next day, me and Aunt Chieu with a little translation help from cousin Ngu, spoke broken English to each other. This mainly consisted of looking at words in my guide book and Ngu's third grade beginner's English books, making lots of crazy hand gestures and saying "I don't understand." It was still fun, though, and a good way to pass the time. 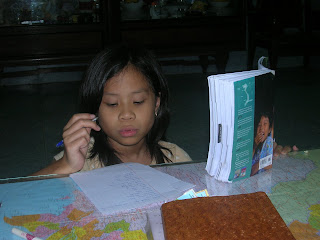 Eventually, after a day of laying around the house (which I needed but led me to go stir crazy), I think Aunt Chieu sensed my antsy-ness and decided to take me to this place. I don't know what you'd call it -- maybe an entertainment park? 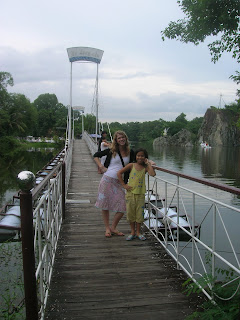 Greeted by a dragon gate, we walked into this deserted amusement park (which people paid to get into) and began walking around. The overcast weather mixed Kenny G's rendition of Silent Night mixed with my inability to ask what the heck we were doing left me feeling a little depressed. Then An's words rang in my head, "You go to the flow." 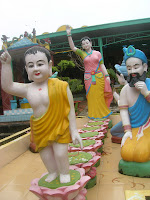 So I walked around and took pictures. Also, inside the park was this temple-like area with vibrantly colored statues, which was kind of interesting and kind of bizarre. (The Scrambler and Buddah have never crossed my mind at the same time -- oh Asia.) We walked a little farther down to a lake where there were paddle boat swans. Apparently that was the reason to come to this park this time of year -- so we paddled. 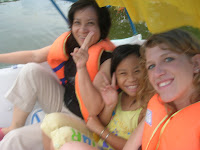 Not wanting to spend another day laying around and making sure I got to see a bit of Saigon before heading back to Cambodia, I tried to tell An and the family after dinner that I wanted to visit Reunification Palace and the Jade Emperor Pagoda and perhaps stop at a cafe for some weasel coffee. This got to be a little confusing, as I didn't want them to think that I wanted to go to Saigon so I could leave. So we had an hour of broken English fun. 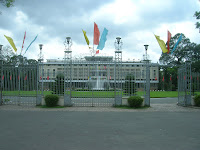 Luckily, we succeeded in understanding each other and I got to see the sites. I'm a little sad I didn't get to try the weasel coffee -- a Vietnamese delicacy in which coffee beans are fed to weasels and then coffee is made from their... yeah. I know, gross, but where else in the world do you get to try stuff like this??? Aunt Chieu told me it was too expensive and even though I insisted that it would be ok and that I wanted to buy some, she refused to take me. Reminding myself to "go to the flow," weasel coffee will be my first buy next time I'm in Vietnam. She made it up to me, though, by giving me some coffee to take back to Cambodia with me (because I don't know if I told, it tastes like bitter brown water here). 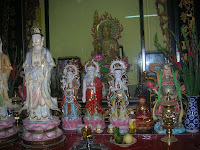 Of course, on my way out of Vietnam I had to have one last "go to the flow" experience to test my endurance as an international traveler. I arrived at the bus stop to find that all the buses back to Phnom Penh were booked. A little frustrated and thinking I'd be spending another night, I met a Cambodian brother and sister who were in the same situation and were in the process of booking a taxi. (Not so "kong mai" now, huh?) Four hours and two vehicle transfers (which got progressively worse as we went along) later, I arrived back home, a little teary eyed and missing my Viet family. 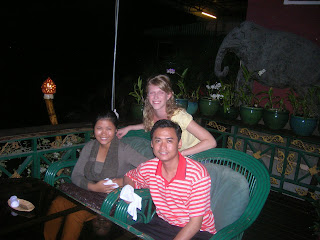 Your pictures on Facebook now make much more sense with the story. Sounds like a good trip! Probably good you didn't spend a bunch of money on weasel coffee, haha.

ha! I'd so drink the coffee if I were there with you!