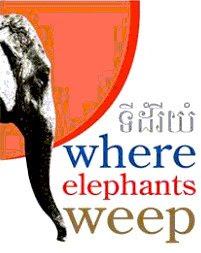 Better late than never to give you a review of the Khmer rock opera I saw last weekend...

The Khmer spin on the classic Romeo and Juliet story, Where Elephants Weep tells the story of two young Cambodians who fall in love and how the tumultuous jungle of family loyalties, religious devotions and cultural differences tears them apart.

Perhaps the setup of the story was a little far-reached. Sam, a music producer in New York, returns to the homeland he fled during the Cambodian genocide to become a monk. During his time as a devotee he meets and falls in love with Bopha, a famous Khmer pop singer. Although the plot line seems corny and a little too pop-culture, it provides an excellent window into the corruption this healing country suffers from.

With a definite western voice, Cambodian nationals might scoff at the simplicity with which Khmer culture and tradition is represented in the story. But for the Westerner, who is likely to question where exactly to locate Cambodia on a map, it gives a good overview of how Cambodia's horrific past has made this place what it is today. The costuming and stage props transport the audience into the heart of Phnom Penh, and give them a good taste of how people in modern Cambodia work to find beauty amid the still torn and tattered way of life.

The blending of traditional Khmer music with modern rock was excellently composed and seemed to represent the constant battle between modernity and ancient culture in which Camodia seems to find itself trapped. The Apsara dancers and shadow puppeteers added a moving story-telling component to the production, though it was too sparse for my taste and could be developed to transform this great production into one that could test the limits of time.

As the cast sets out on an Asian tour and then on to the U.S., I recommend that anyone who has the opportunity to see Where Elephants Weep should. Not only will the music and story entertain you, but it will enlighten the Western population to this mysterious pocket of the world.

(Picture courtesy www.whereelephantsweep.net)
with love from Rachael at 4:26 AM